Formulate is currently available by invitation only 💌. Enter your email to be added to our wait list.
Please provide a valid email address 😭
ADD ME TO THE LIST
Home
Life
Apr 17, 2020
Comments
SHARE: 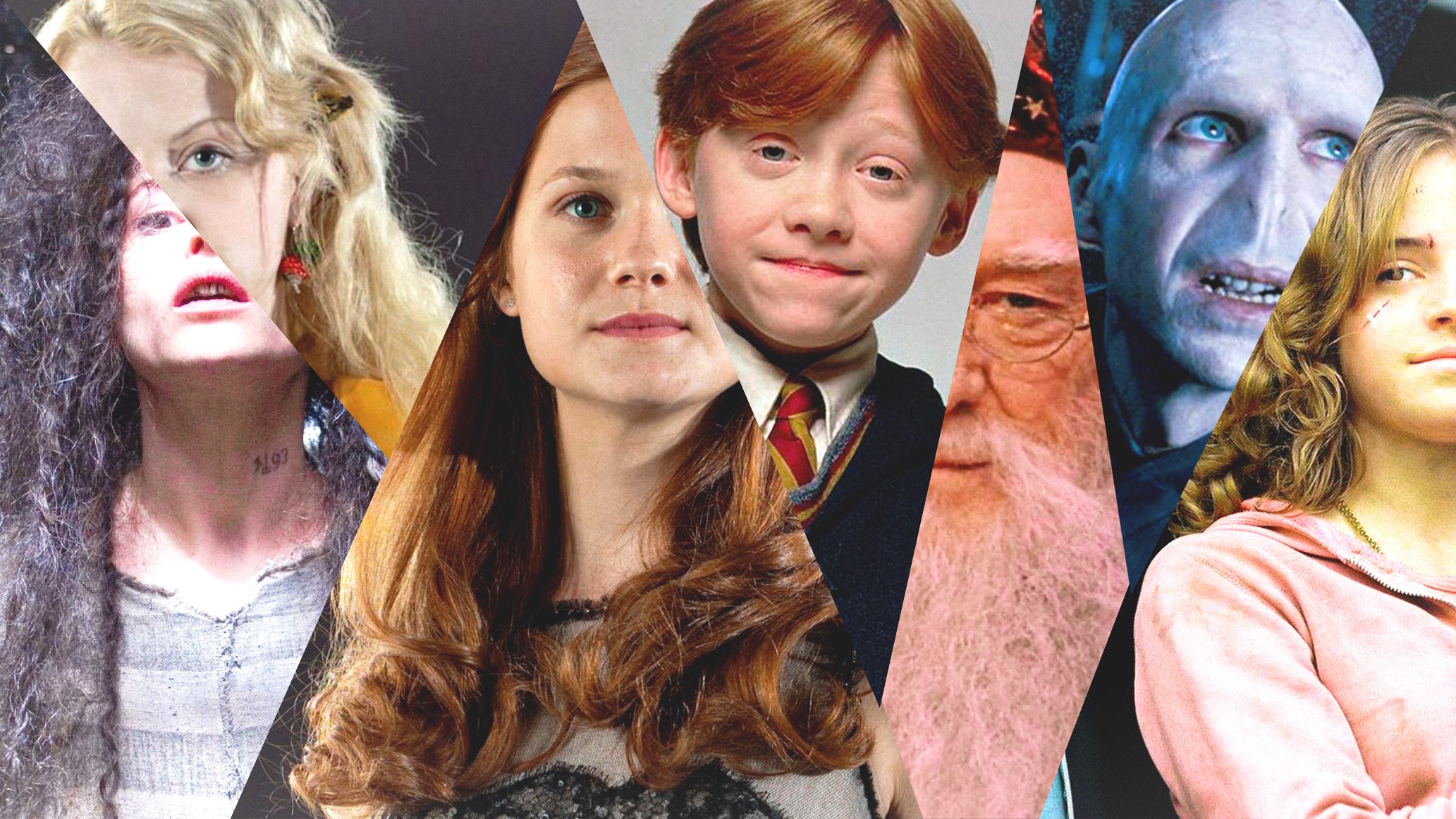 The most ✨magical✨hair ranking you'll ever read!

Good vs evil? Been there, done that. Now, it's time for the final showdown between Harry Potter characters to determine who's got the best head of hair.

With such a vast character universe and a whopping 8 movies to cover, we've narrowed our list down to 14 competitors. Who will prevail as the supreme hair king/queen of the wizarding world? Keep reading, and find out.

HA! Voldemort doesn't even have any hair (where are you eyebrows at, man? Did they crawl away because you were too evil?) and his scalp looks super unhealthy.

Seriously, is it normal to have that many visible veins on top of your head? Because we really don't think so. Byeeeee, Voldy.

Best hair moment: Perhaps the flashbacks to when he was a teen at Hogwarts and still had hair? Even when he was a kid, there was some weird stuff going on. 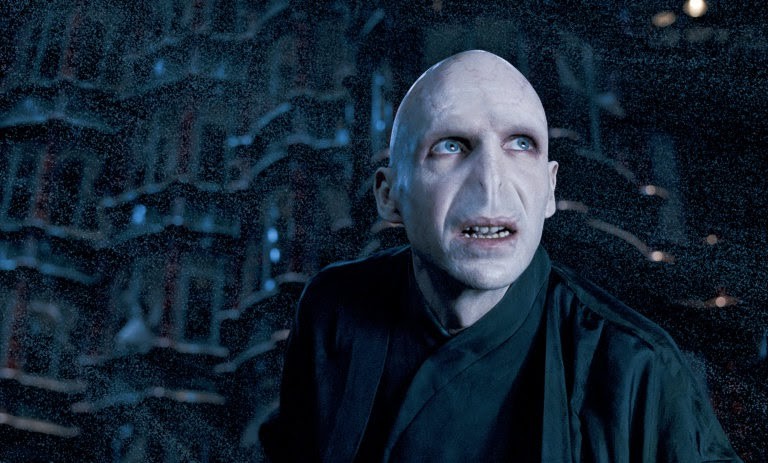 Snape could really do himself a favor by switching to a sulfate-free shampoo. You've got to get that oil production under control, buddy.

You would think that, being the potions master and all, he would understand the importance of a properly formulated hair product right? Right?!?

Apparently not. Ah, well. Moving on.

Best hair moment: Snape as a kid is actually super adorable and non-greasy. He's got a baby emo-rockstar thing going on and is honestly pulling it off. RIP adorable baby Snape. 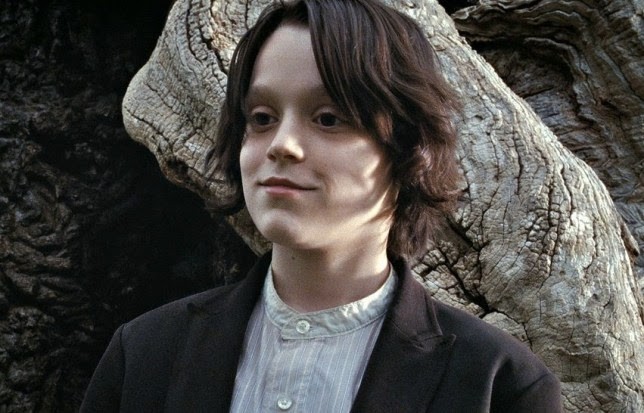 Worst hair moment: The rest of the series, with the exception of Half-Blood Prince and Deathly Hallows. His hair is a little more winswept and fun here, but everything else is pretty rough.

We love Hagrid as much as the next person, but does he own a hairbrush?

Or maybe he does, and actually has super curly hair and hasn't heard that dry-brushing curls is a big no-no. Either way, he gets a couple extra points for that rather impressive beard (So long! So full!), putting him just a smidge ahead of Snape.

Best hair moment: Deathly Hallows. Everyone's hair is a mess in that movie, what with the whole battle and all. At least has an excuse and fits in. 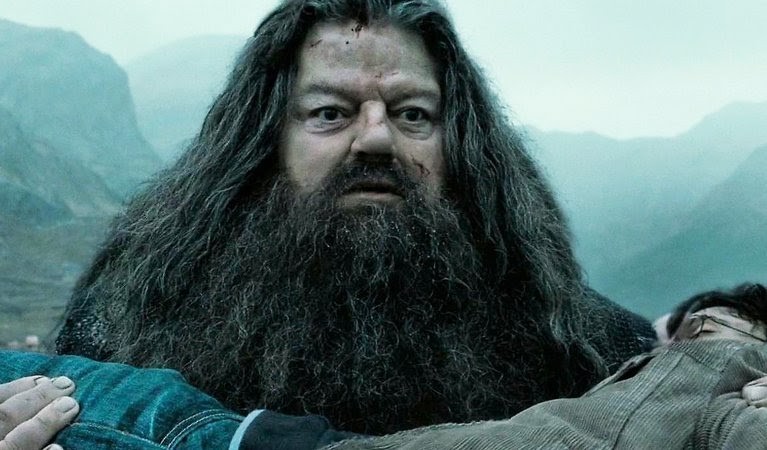 Worst hair moment: His hair is a smidge tanglier and messier at the beginning of the series, so probably Sorcerer's Stone. But it's hard to say definitively. 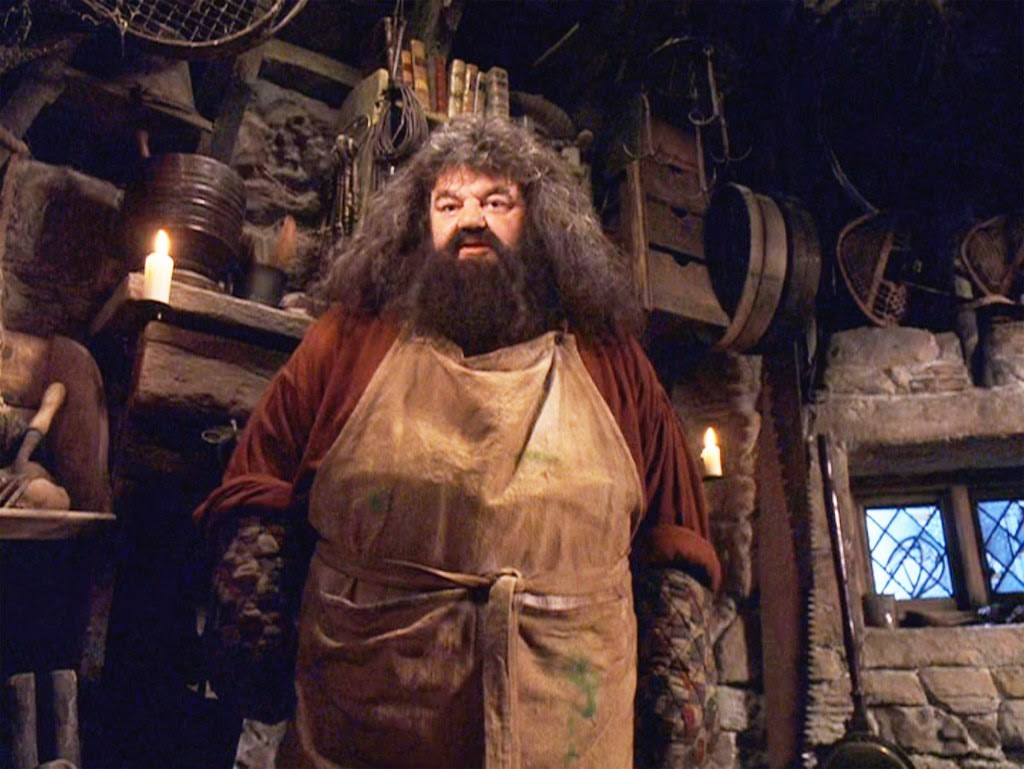 He may be the series' namesake, but he is not it's hair hero.

Harry's hair best flatters his face when it's short, and out of the way. Despite this, ya boi really, really seems to dig bangs. More power to him, maybe, but it's still not a great look.

Best hair moment: Half Blood Prince. It's tidy(ish), and out of the way, and that's the best we can really ask. 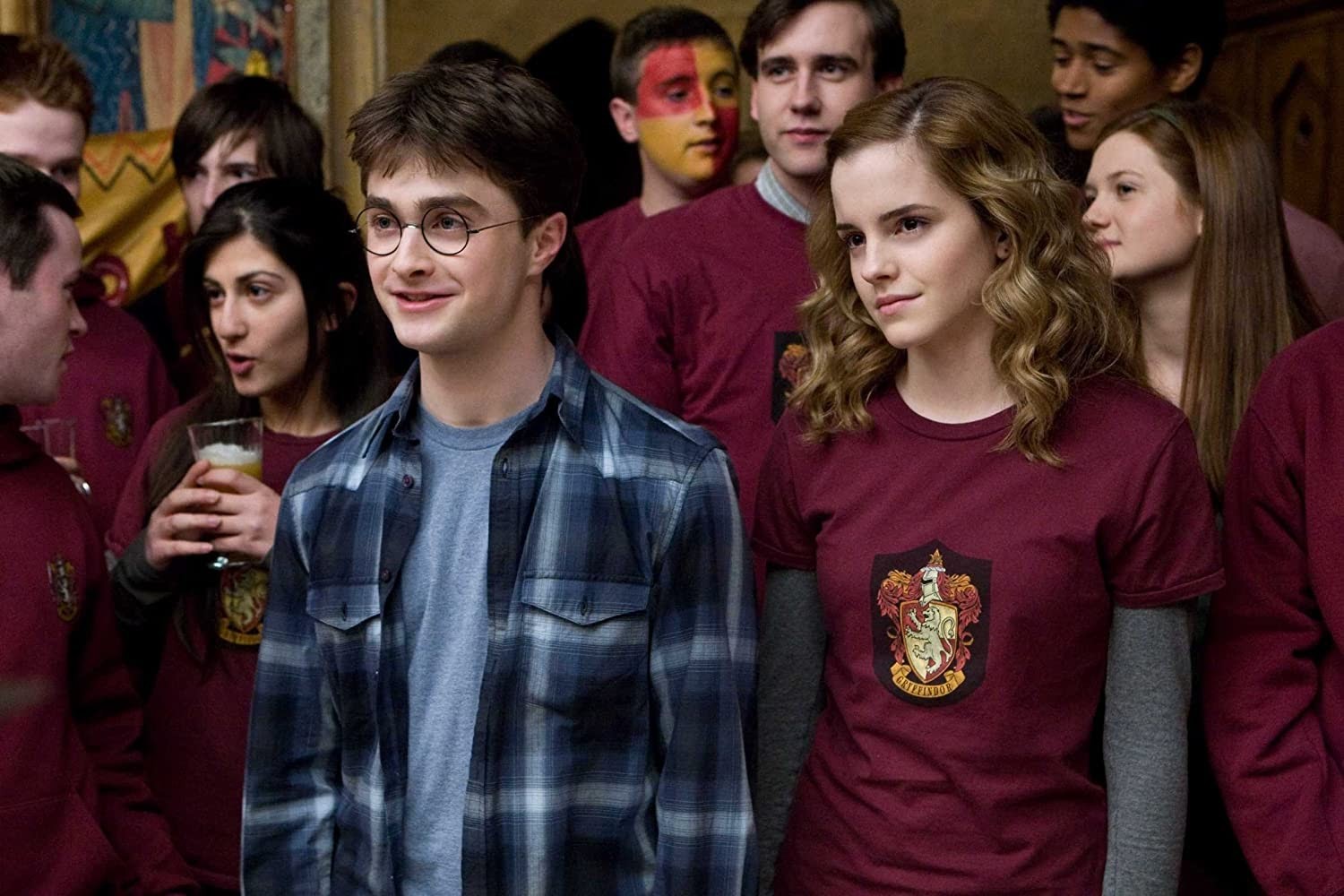 Worst hair moment: Goblet of Fire. Why all the feathers? What is this, the 1970's? 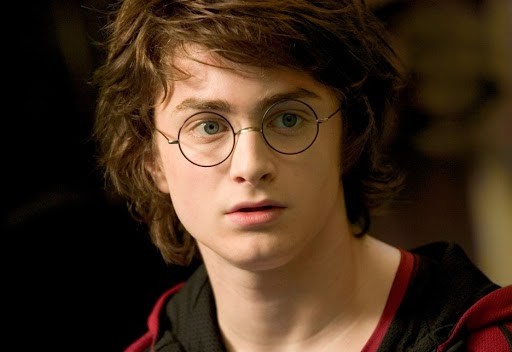 But it also looks a lot like every other famous, elderly, magical man's hair, to almost an absurd degree. See: Gandalf, Merlin, Odin, Father Time, or even Santa Claus, just to name a few off the top of my head.

So yeah. Unimpressed. Next. 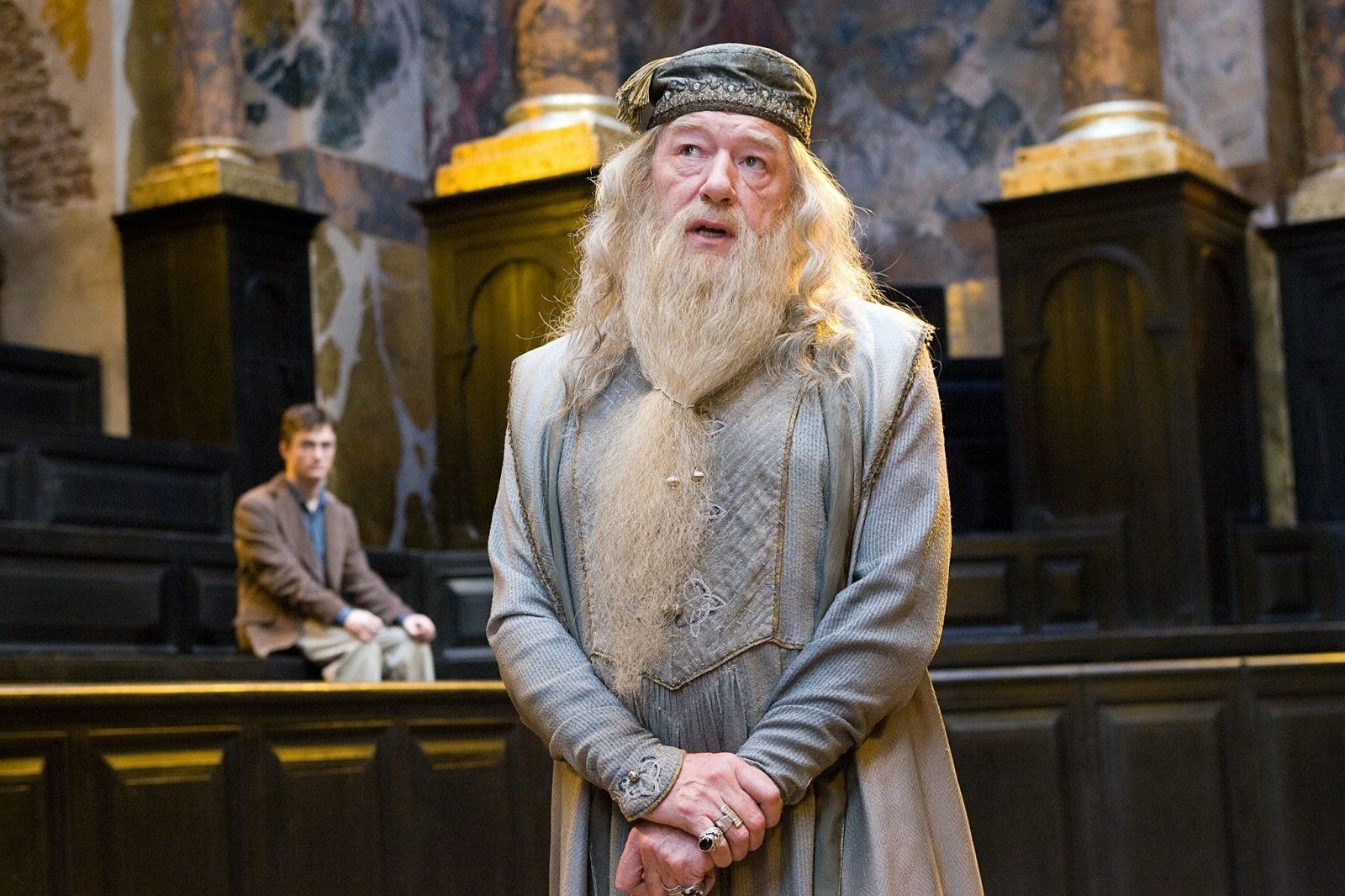 Worst hair moment: He doesn't really have many bad hair moments, his ranking is low-ish more because of a lack of originality. 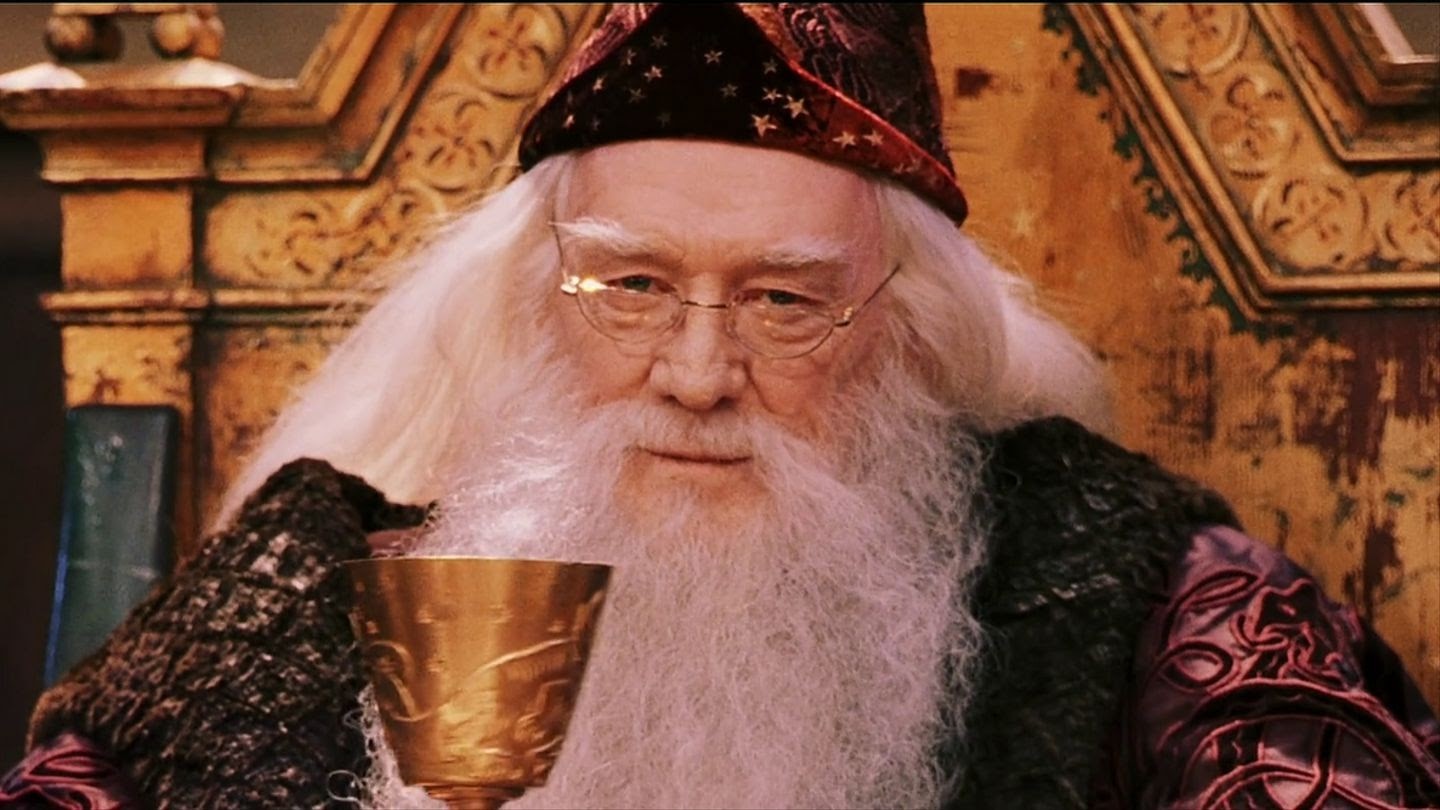 There isn't anything really objectively wrong with Lupin's hair, it's just... kind of blah and not what we would hope for.

Considering that he's a dang werewolf and all, you'd expect his hair to be a little less thin and limp. Where's the vitality? Where's the volume? Where is the wolfiness?

Best hair moment: In Deathly Hallows, sometimes he has his hair pushed back from his face and it is A LOOK. 11/10 stylish professor.

Worst hair moment: Whenever his bangs are all up in his face. He goes from being tastefully mussed to just looking sweaty, yet still not very werewolf-y. No thanks. 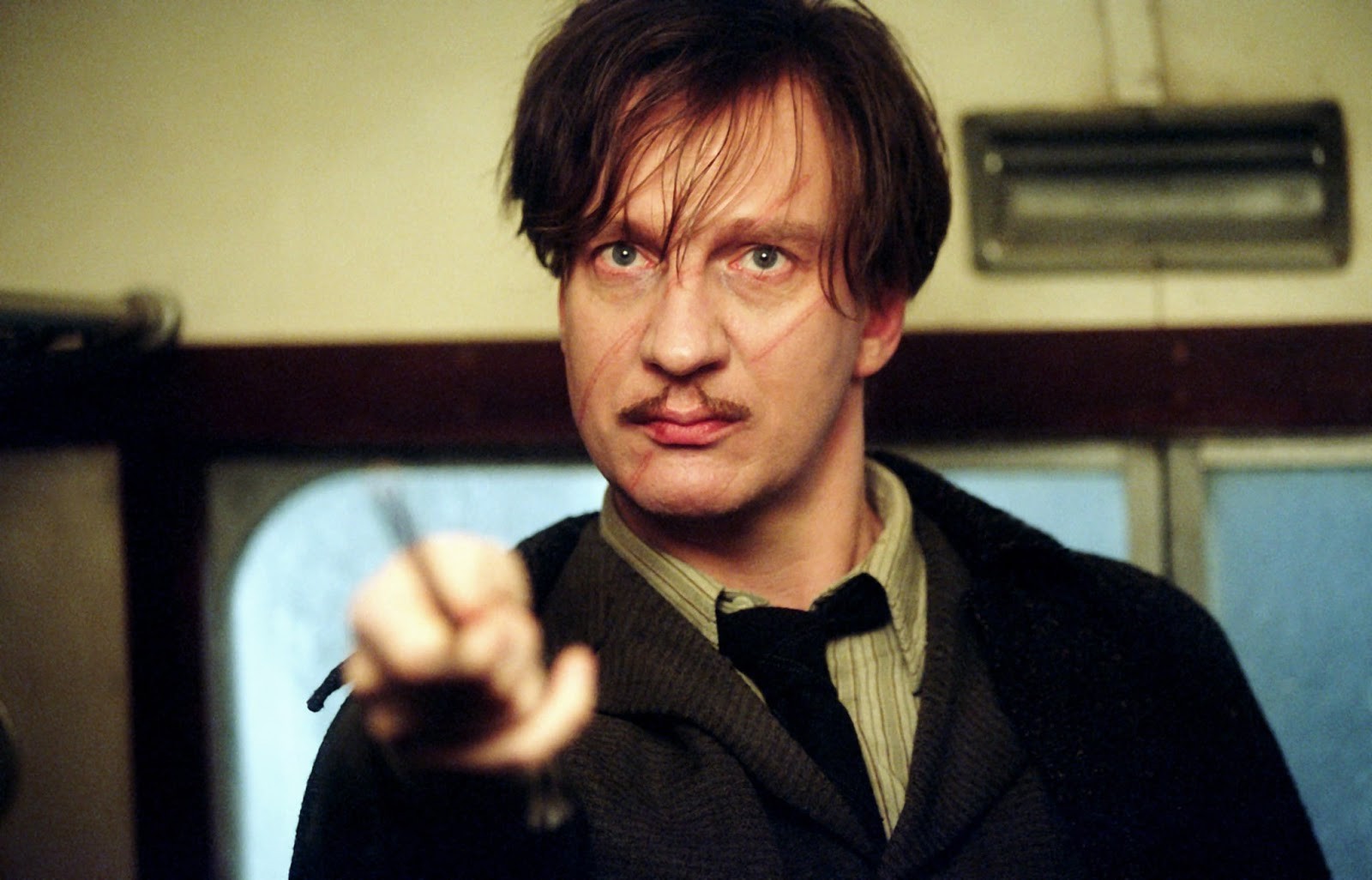 Ron's hair is consistently unimpressive throughout the series. If he's not rocking a wavy bowl cut (eek), his hair resembles a shower cap.

The color is good, and it's pretty shiny, but buddy really needs a non-showercap/bowlcut haircut. He also doesn't learn how to actually style his locks until Prisoner of Azkaban (a good hair moment for Ron!) but then immediately forgets how during the next movie. BIG SIGH.

Best hair moment: Ron's Sorcerer's Stone haircut works really well on him as a little kid, despite being a semi-bowl cut. He's precious! 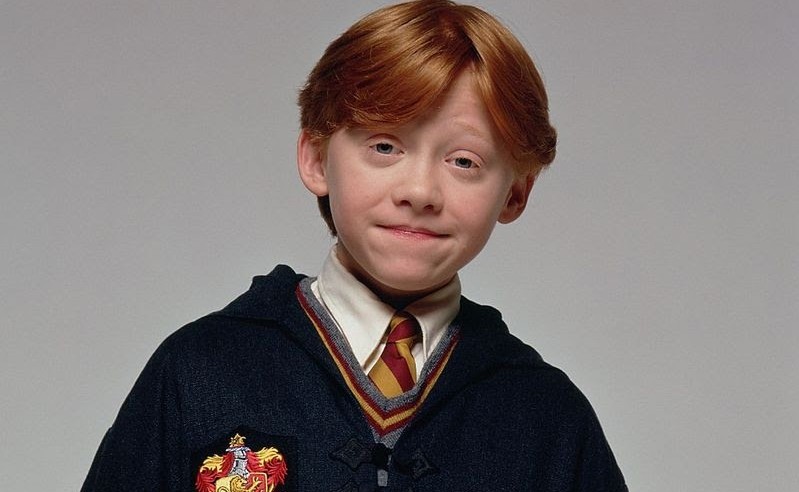 Worst hair moment: The entirety of Goblet of Fire. God help us.

Okay, let's all recognize that Hermione's film hair could have been handled so much better.

Hermione is a hair contradiction. In the books, she's described as having big, bushy brown hair with lots of frizzies. She's not meant to be a shiny, smooth hair queen, and that's totally fine and understandable. After all, big, unruly hair can look super cool; see Bellatrix for reference!

Unfortunately, the films could never figure out what exactly to do with Hermione's hair. The first movie, arguably, went a little overboard on the bushiness. Hermione's hair is SO big and SO frizzy that it seems they felt the need to overcorrect during the second film.

Chamber of Secrets gave us a Hermione with hair that was crimped and shiny and only a tad unruly; it didn't feel true to her character. Things only got worse from there -- Prisoner of Azkaban on, Hermione had shiny, lovely, perfect waves that looked great, but did nothing to show who she was meant to be as a character. SAD.

All that being said, her hair does look consistently very nice. So she does get points for style, even if that style doesn't make sense.

Best Hair Moment: This one moment from Half Blood Prince is exactly what we should have seen from Hermione the entire series. I feel cheated. 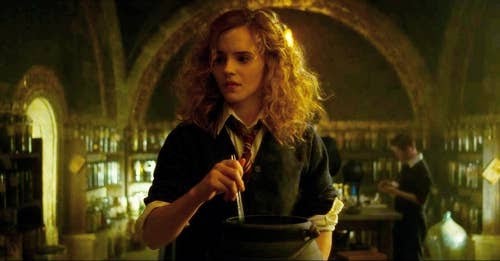 Worst Hair Moment: EXCUSE ME, where the heck did these perfect curls come from in Prisoner of Azkaban??? Who is this girl, we don't know her. 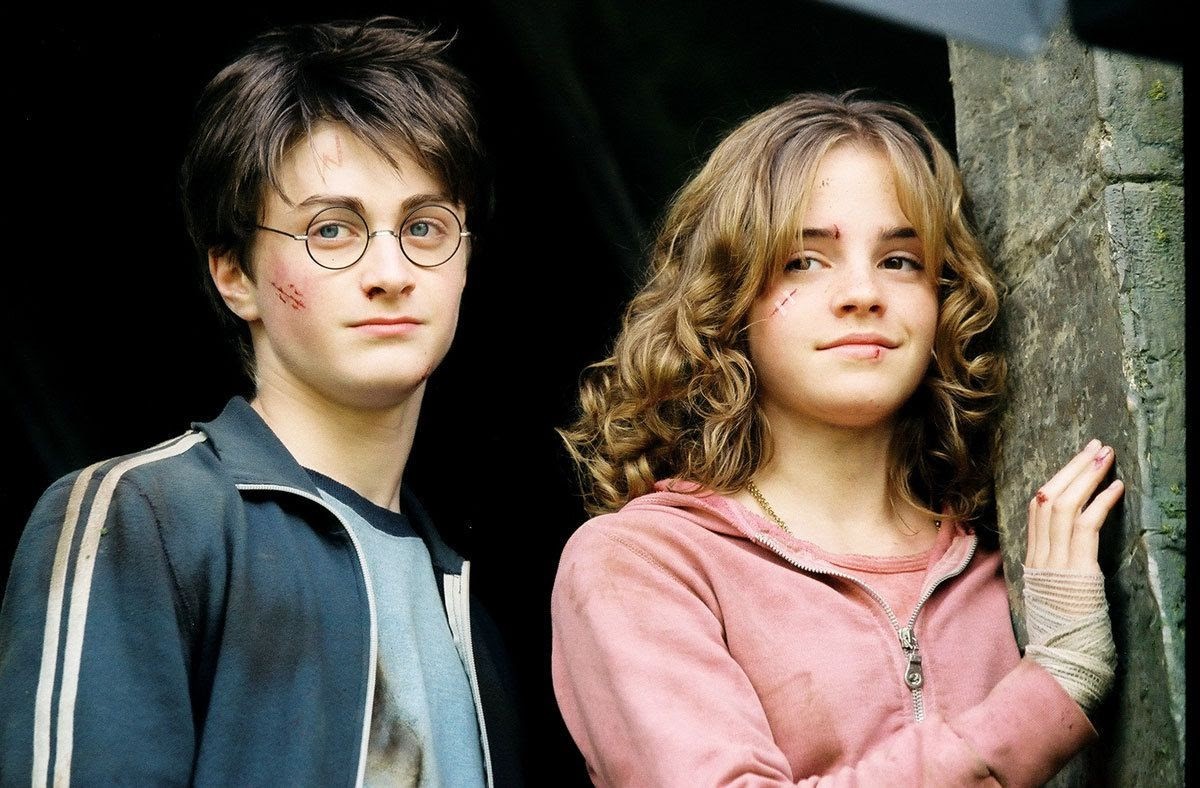 Ok. This is a complicated one.

Ginny has continuously had good hair throughout the series. It's shiny and smooth, and generally healthy. If I saw her hair on a random person on the street, I'd think it was cute.

HOWEVER, there's not a lot going on here, personality-wise. While Hagrid's hair, for example, is not the most stylish, it does give visual cues to the kind of person he is. Same for Harry and Ron; while their haircuts were at times atrocious (just watch all of Goblet of Fire, really none of the guys except Cedric Diggory -rip- have good hair), we're able to use these haircuts to see them growing up and navigating awkward phases, displaying character development.

Ginny's hair really doesn't change significantly, nor does it give any interesting cues into her character, except to show that she's a member of the Weasley family. Still, it's not as bad as Hermione's hair, which directly goes against her portrayal in the books.

It is possible to have both good hair and display character, as we'll see in our next characters.

Best hair moment: Ginny's Bill/Fleur wedding curls are cool I guess, but not that much cooler than her regular straight hair. 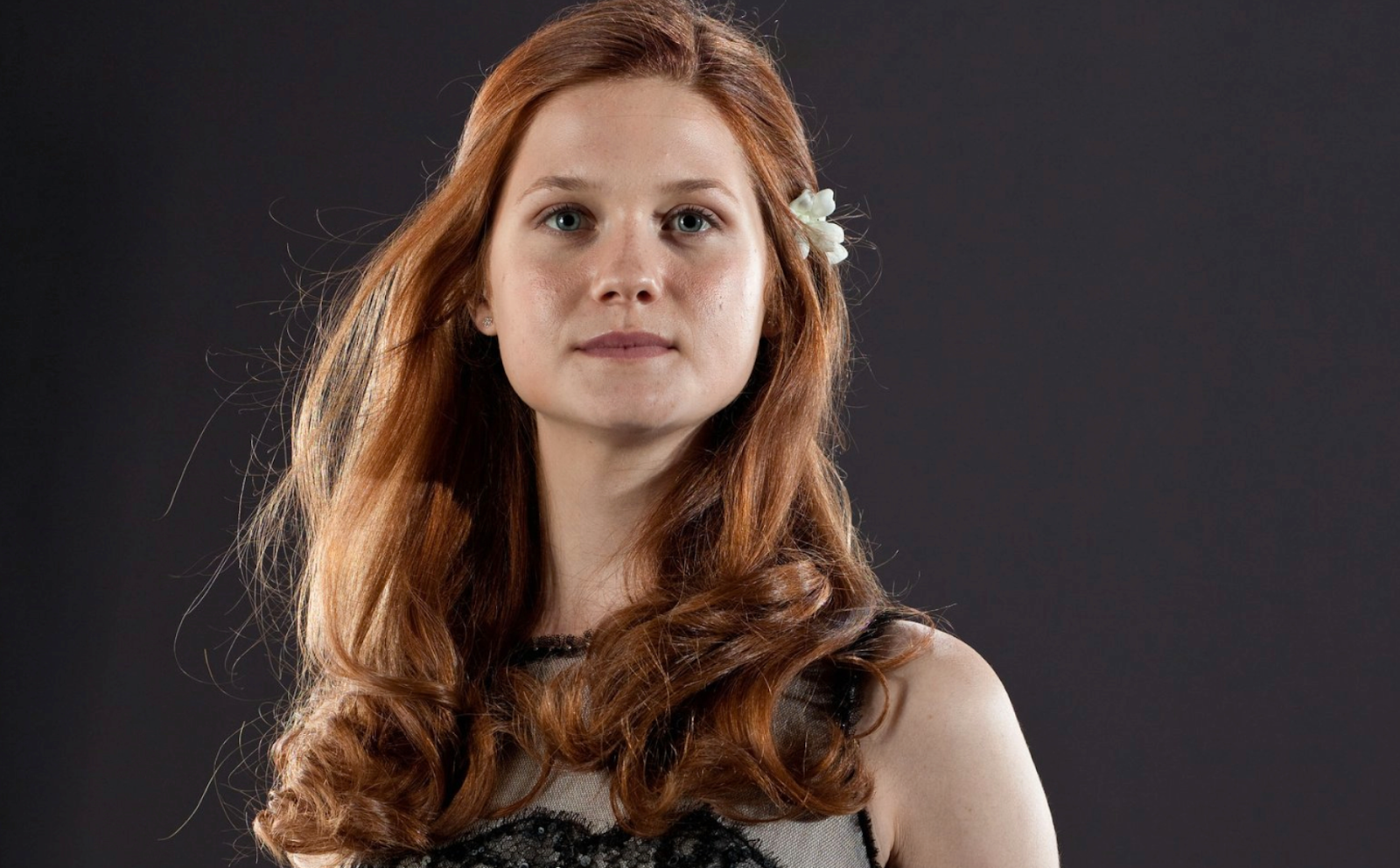 Worst hair moment: She doesn't really have one, which is part of the problem. Even in Chamber of Secrets, when she was fighting a psychological battle with a dang horcrux and was passed the heck out her hair was nothing less than artfully mused.

While Malfoy started out with a couple of really rough do's (more like don'ts --zing!) he eventually grew into the moody ice blonde hair prince that we all know and love.

His hair is typically healthy and shiny (with the exception of the early hair gel years), and his haircuts are interesting throughout the series, even when they're, you know, not super flattering. And that's absolutely fine; even when his hair is at its finest, Malfoy isn't here to be fashionable, he's here to be moody.

Best hair moment: Malfoy peaks in ~confused and tortured~ hair vibes during Half Blood Prince. He alternates between a tidy and much improved usage of hair gel and a fashionably messy cognitive dissonance kind of look. Oooh, hair symbolism! We approve. 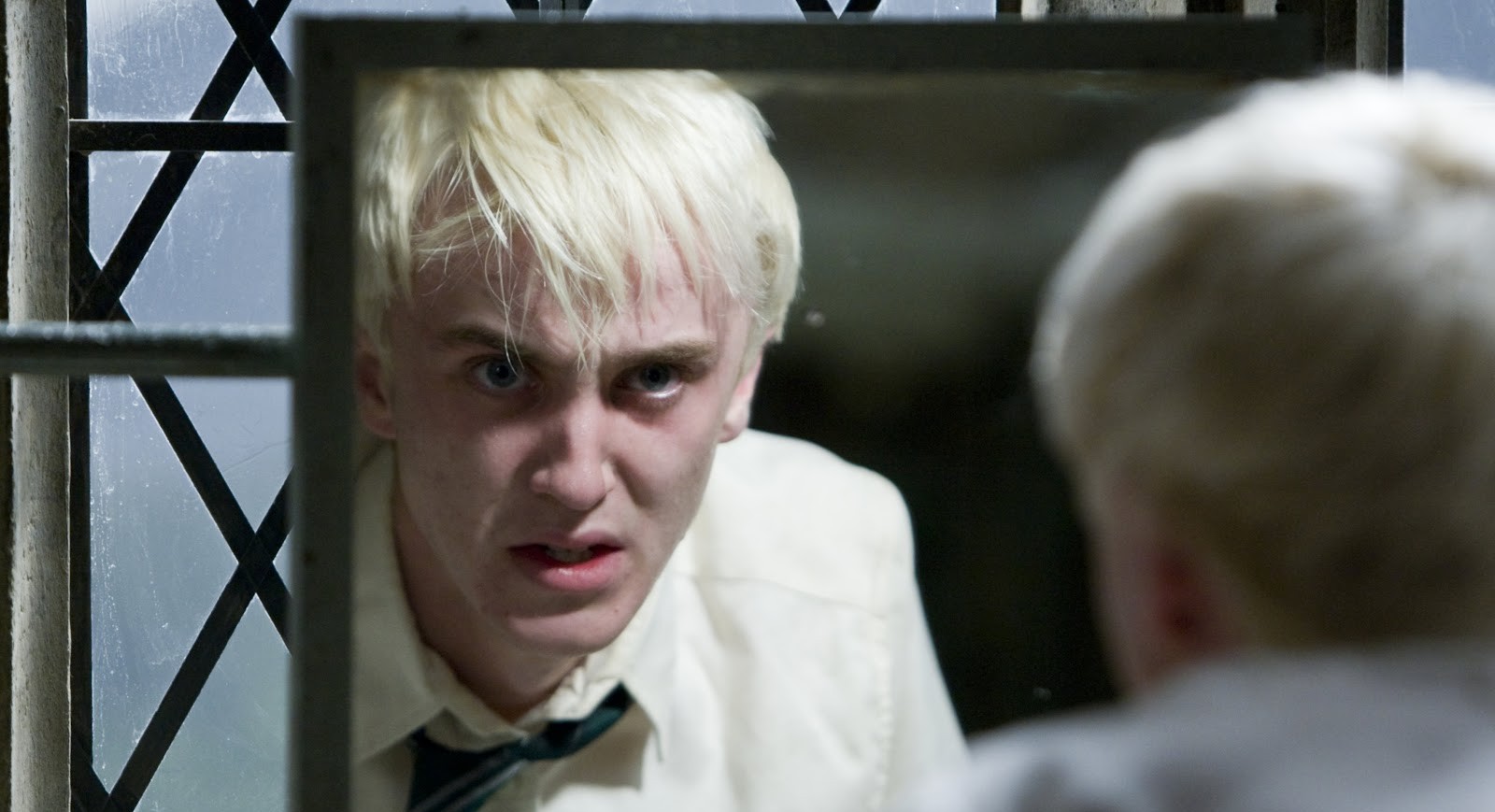 Worst hair moment: LOL a tie between Draco's super slicked back hair of movies 1 and 2 (why was it yellow in Sorcerer's Stone? Did he forget his purple shampoo when he went to Hogwarts?) and whatever rebellious evil tween thing his hair is doing in Prisoner of Azkaban. Truly fascinating how we went from I love hair gel and must never have any hair in my face, ever to fluffy bangs galore in a single summer. 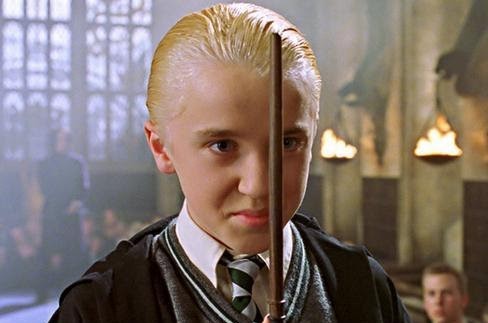 We don't even care that Luna was written as a strawberry blonde in the books, because her ice blonde movie hair suits her space-cadet weird-girl personality so well. It's a little frizzy and stringy sometimes early on, but it works for her so whatever. Her super-long Half-Blood Prince curls are true magnificence.

Best hair moment: Her Bill/Fleur wedding hair is a LOOK, and anyone who says otherwise is wrong. Look. At. Those. CURLS. Effortlessly fashionable space cadet. 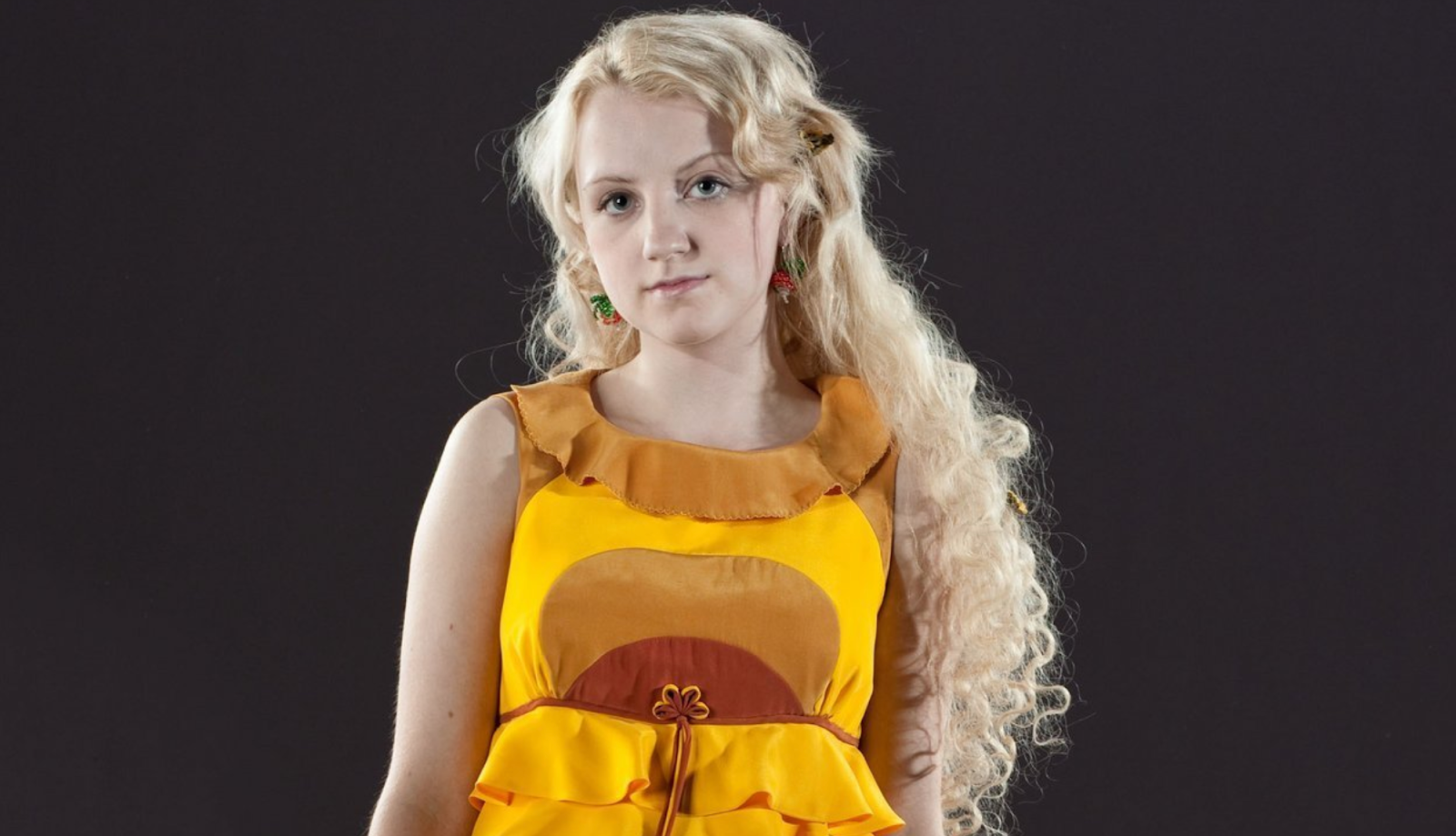 Worst hair moment: Her hair looks a bit frayed and damaged in Prisoner of Azkaban, kind of like she'd gotten a bad bleach service. 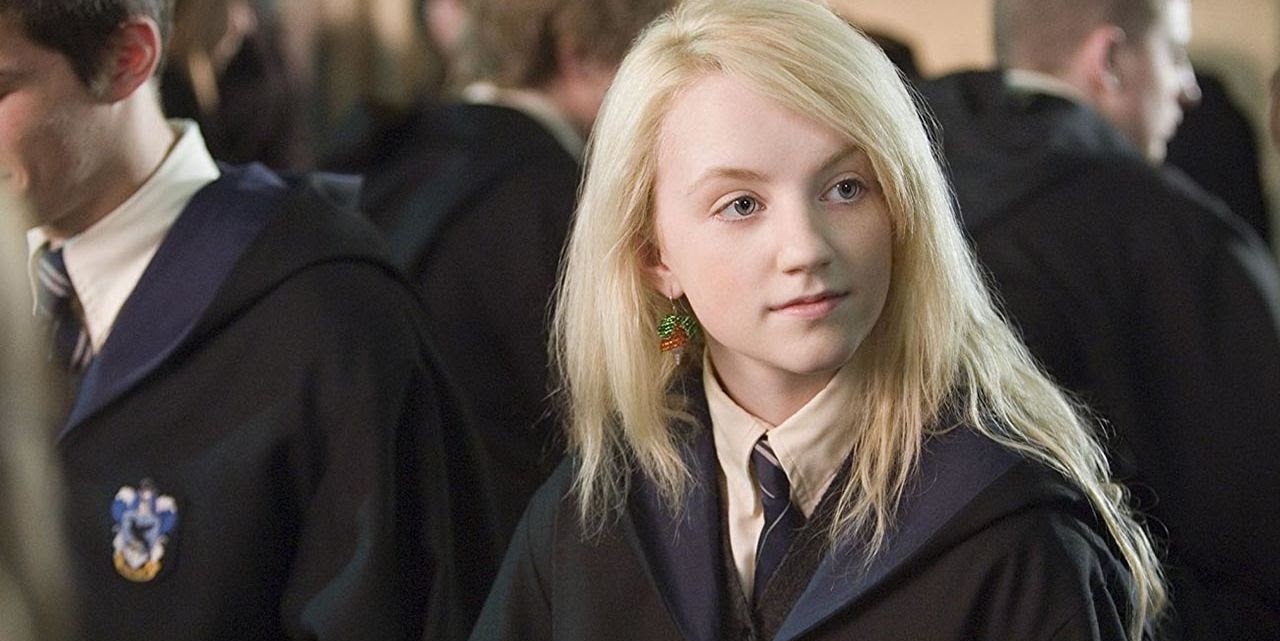 Yes, she's evil. And being evil is bad.

But Bellatrix has great hair.

You can't possibly stay perfectly coiffed all the time when there's a magical world to take over and evil to spread, amiright? 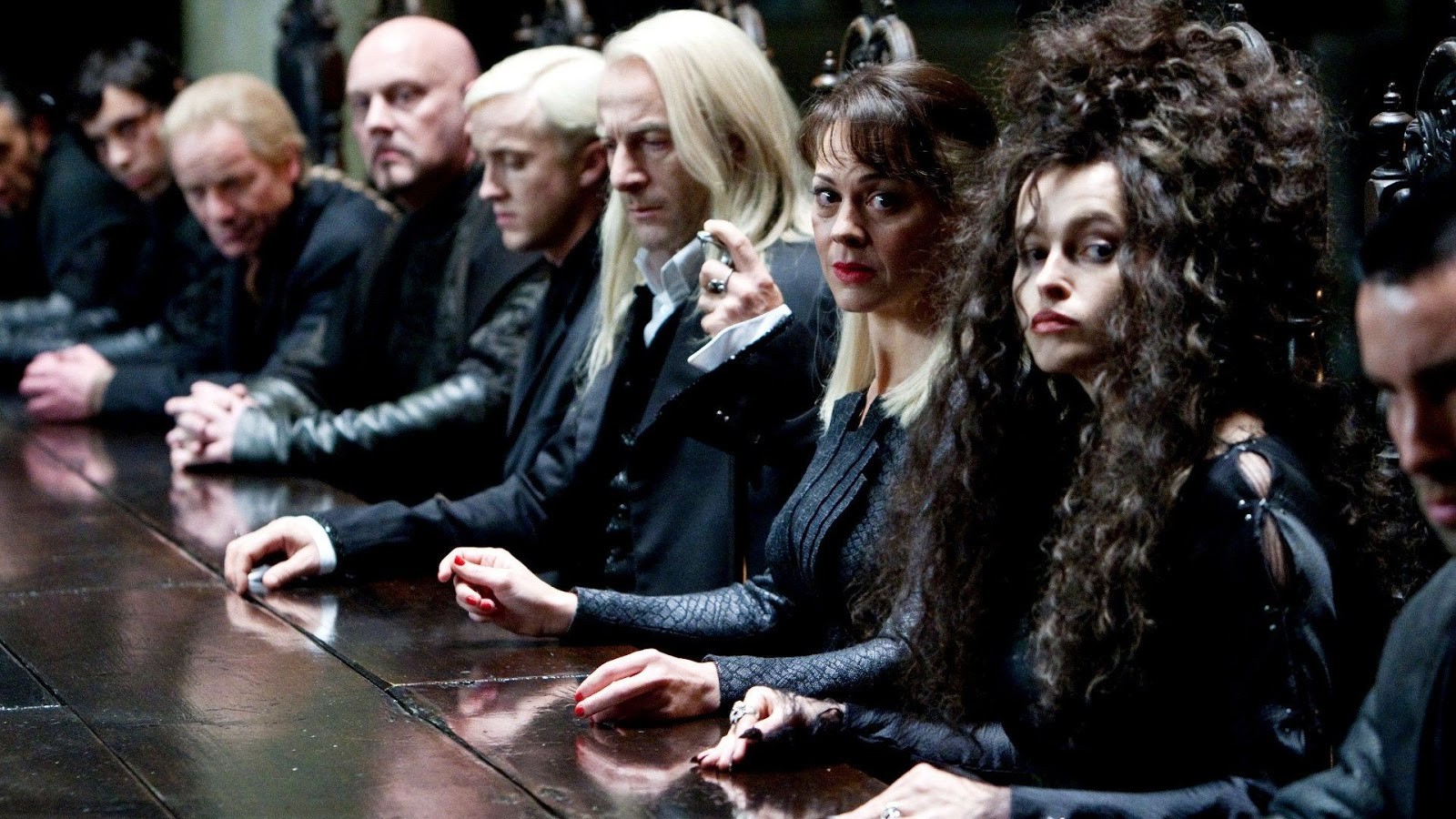 Worst hair moment: Her time in Azkaban. Oh girl, did the dementors torture you by dry brushing your curls? We shudder. 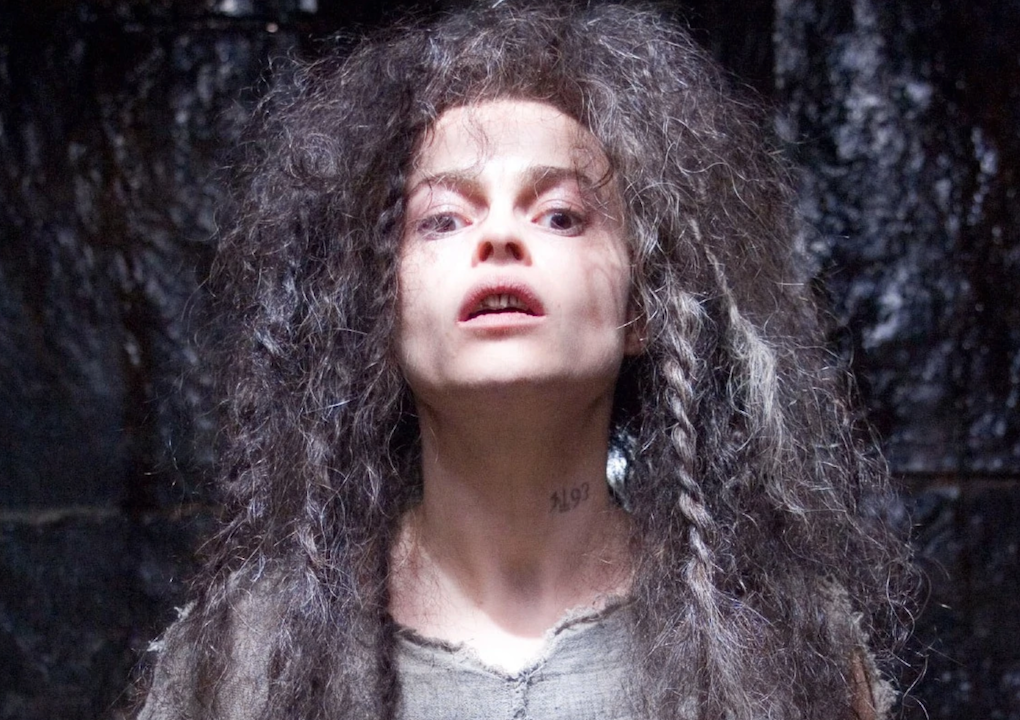 If you've ever been told that you can't have long hair after turning (insert number here) years old, show that person a picture of Minerva McGonagall. McGonagall is a hair ICON, and her updos are the stuff of legend. How she has the time to her magnificent Gibson Girl inspired locks while also being a kick-butt professor is beyond me; we assume magic? Her look is timelessly elegant, and it matches her personality perfectly.

Best hair moment: Can we say all of them? Is that cheating?

Worst hair moment: Sometimes she wears a hat, so we tragically cannot see her hair. So sad, but we respect her fashion choices. 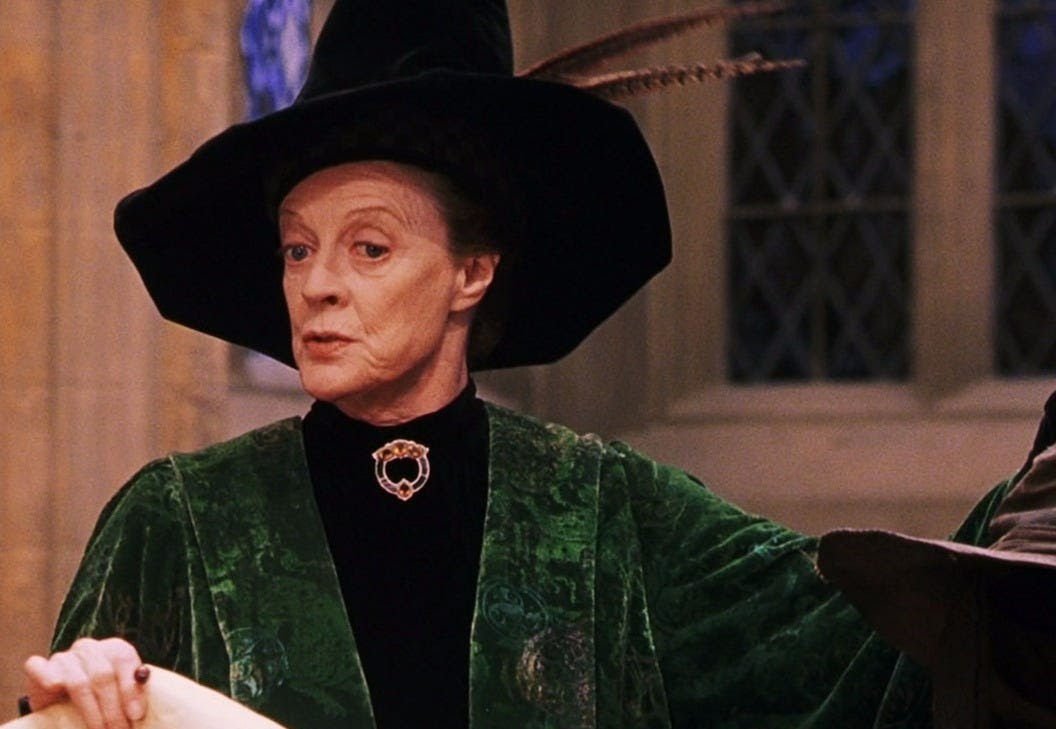 With the exception of when he was fresh out of Azkaban and looking just a smidge unkempt, Sirius has really, really, really good hair.

There's so much to talk about here-- such shine! Such volume! Such wave definition! Such a great length! And that little curl that falls over his forehead is an amazing final touch, showing that he's still a man of ~mystery~ and ~adventure~ . Sirius perfectly pulls off the oh I just woke up like this look, even though he ABSOLUTELY spends a good deal of time styling.

It's important to note that good hair makes a decent bit of sense for his character, so this isn't just another Hermione situation of a character being given improperly great hair. With the exception of immediately after his escape from Azkaban, the books don't describe in detail what his hair looks like once he's had a chance to heal from his ordeal. Still, In his youth, Sirius is described as having an air of casual elegance, so it's not too crazy to imagine he'd return to being an elegant man, with a touch of french-girl-esque messiness.

Best hair moment: Almost all of them. Sirius-ly (zing!), find me a moment in which he is anything less than a hair icon. 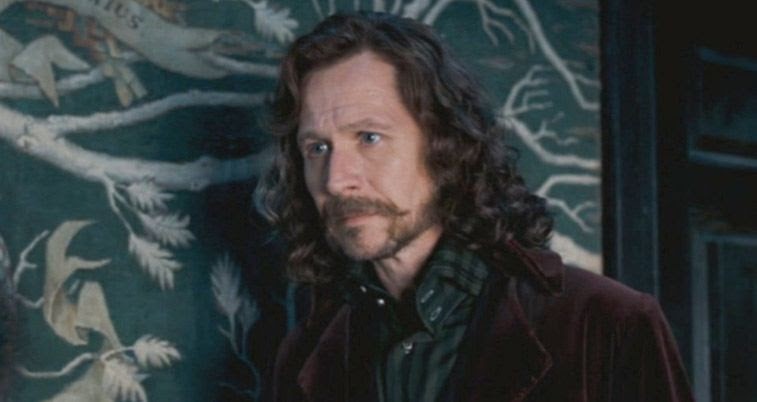 Worst hair moment: He doesn't suuuper match the book's description of him after his escape from Azkaban; he looks way too pretty. But other than that, his portrayal is dead-on.

Craving more rankings/general hair silliness? Here's what we recommend next:

17 Times Hair in Superhero Movies Was Unrealistic as Heck