Your hair is thinning? We can help...
Save 25% now and have a Formulate chemist design customized hair & scalp formulations that will help your thinning issues once and for all.
We will be in touch 🙌
Ready to start your healthy hair & scalp journey with Formulate's customized shampoo & conditioner?
Please provide a valid email address 😭
GET FREE HAIR ANALYSIS NOW  TAKE THE QUIZ NOW
Home
Life
May 28, 2020
Comments
SHARE: 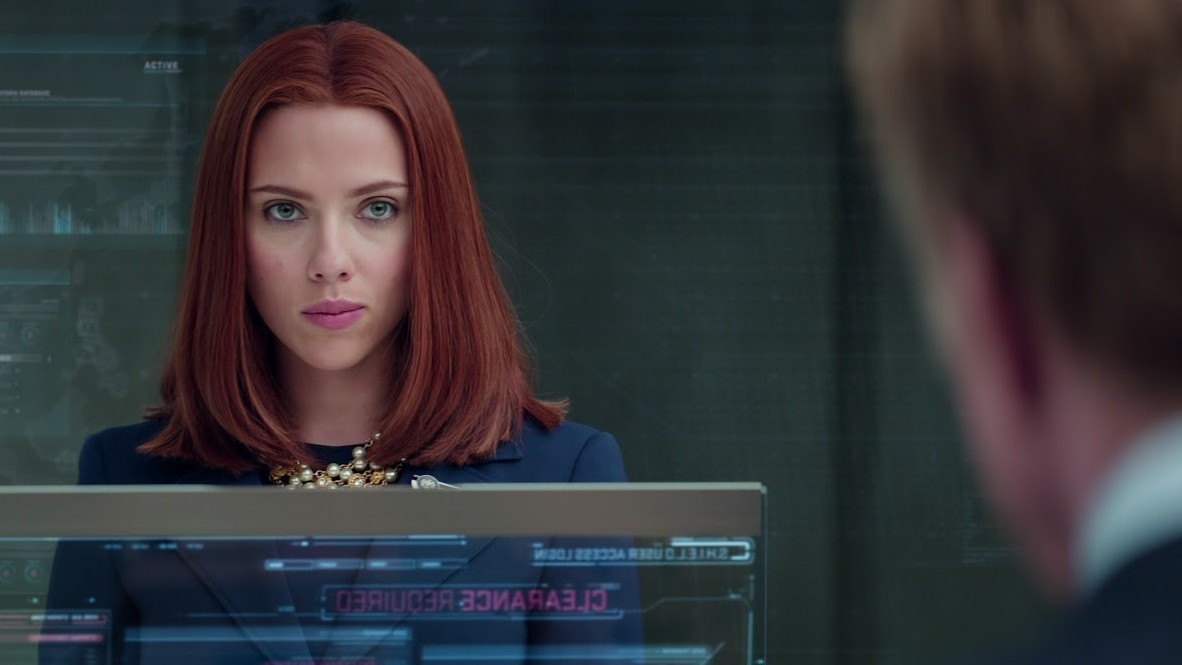 Behold, the definitive ranking of every single one of Black Widow's hairstyles.

Despite being lowest-ranked on our list, Black Widow's hair during Iron Man 2 isn't bad. This is, after all, Natasha Romanoff; hair queen for the ages. She doesn't really ever have bad hair, just confusing hair that probably shouldn't be worn during a fight.

And yes. When we say confusing hair, we do primarily mean this uber-curly look.

Not very battle friendly, no? And where the heck did all those perfectly springy curls come from? There's no way that Natasha curled her hair in the car when we weren't looking, right? She couldn't be that sneaky.

Literal minutes before this scene, our hero had her hair up in a bun. We'd like to know the logic behind letting her hair down instead of, you know, keeping it up and out of her face.

Obviously she's amazing and can handle anything, but those crazy curls had to have felt distracting. This is prom-hair, not battle-hair.

Outside of this scene, Natasha plays it cute & cool during the rest of the movie. She wears a lot of loose curls while putting up with Tony Stark's attitude (10 out of 10 on that one, girl, amazing undercover work).

She did break cover a smidge that one time when she kicked Happy's butt in hand to hand combat, but we've all got our limits. Sometimes, a girl's just gotta remind everyone who's boss, you know?

Note how flawless her hair remains after wrestling a man to the floor. We would have expected her to be a bit mussed from that experience -- Natasha must be using an awful lot of hairspray to hold her styles in place.

With all the drama and internal fighting in this movie, we'd like to know how it is that Black Widow has time to style her feathered hair to be so... feathery. Is she keeping a curling iron with her at all times for between-fight touchups?

Don't get us wrong, this style looks really, really good, but how does it stay in place when she's fighting? Feathery hair is a fickle creature and can lose its volume at a moment's notice. There's no way that she's managed to keep it all glued in place without some serious hairspray.

Loose feathers are also not a very battle-practical hairstyle. How can she see with all that hair flying around her head? It's got to be annoying.

There's this thing called a ponytail, Natasha. You should try it.

OMG, a movie where Black Widow has something other than curly hair? Shocking. Could it be that her natural hair texture is actually straight?

Style-wise, this cut is kick-butt. It's smooth, sleek and super blunt--just like Natasha herself. If you turned Black Widow's personality into a haircut, this is it.

And that color? My-oh-my. Our hero has finally escaped from the weirdly fake variations of red from the first few movies (looking at you, Iron Man 2) to a shade that's both realistic and stunning. Just. Look. At. That. Copper.

Is this cut practical? Probably not, but at least it's not as bad as her feathery hair. While that look absolutely had to be styled fresh every morning (with regular touch-ups during the day), this cut could hypothetically maintain its shape with only an occasional blowout (and by occasional, we're talking at least twice a week. It costs to be cool, y'all.)

Overall, the idea that Natasha maintained this hairstyle while being on the run with Captain America isn't completely absurd, but it's a bit of a stretch. The biggest problem with this cut is that it's still not battle friendly -- like, at all. Natasha, hun, putting your hair up in a ponytail or bun is not a sign of weakness. It's okay to have your hair out of your face when you fight, girl!

Final Opinion: Black Widow's Captain America: The Winter Soldier hair looks amazing, and isn't quite as impractical as some of her other hairdos. But she still seriously needs to pull her hair back.

This haircut is basically the same as the one we saw in the very first Avengers movie, if slightly more beachy. 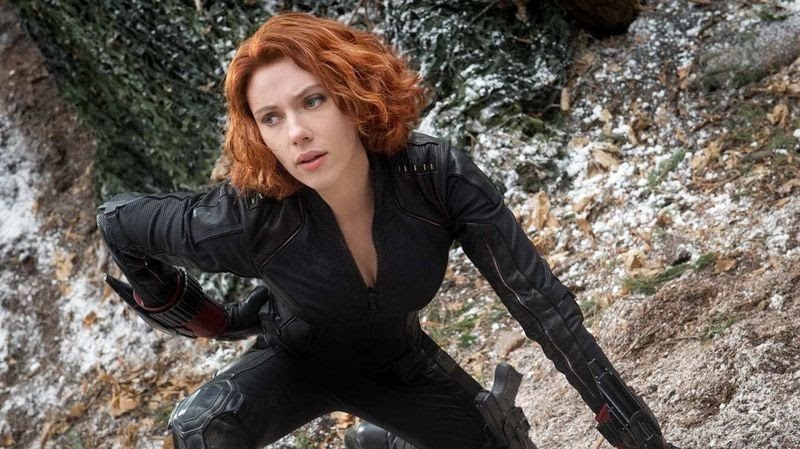 Natasha's battle hair is still styled, but this time it's... less obviously styled? She's less hyper-focused on fabulousness in battle, which is probably more realistic. Still no ponytail, though.

Black Widow's shorter hair certainly requires less maintenance than her longer hairdos, making it a little more logical for her profession. While, on a style level, we think her Winter Soldier hair is superior to this cut, we're bumping this one up purely because of practicality. Even in a superhero movie, we can't really expect our heroes to have disaster-defying perfect hair all the time.

HOWEVER, we cannot ignore the bangs included in the flashback to Natasha's younger years. We're not sure what the filmmakers are trying to say about Natasha's past via giving her bangs-- are they just trying to make her look younger? Because jeez.

Final Opinion: the main appeal of Black Widow's Avengers: Age of Ultron hair is that it's less super-styled during battles -- hurray for some realism! Still, we've already seen this style in the first movie, so thank u, next.

Yes, girl! Way to do a big chop after Iron Man 2! Natasha's hair is SHORT(er), and she's ready to save New York. Pesky loose curls aren't getting in her way this time around, even if she continues to refuse to pull her hair back.

This look reminds us ever so slightly of 1950's curls, but in a more low-key way. Does Natasha still look a smidge too perfect in some battle scenes? Yes, of course. 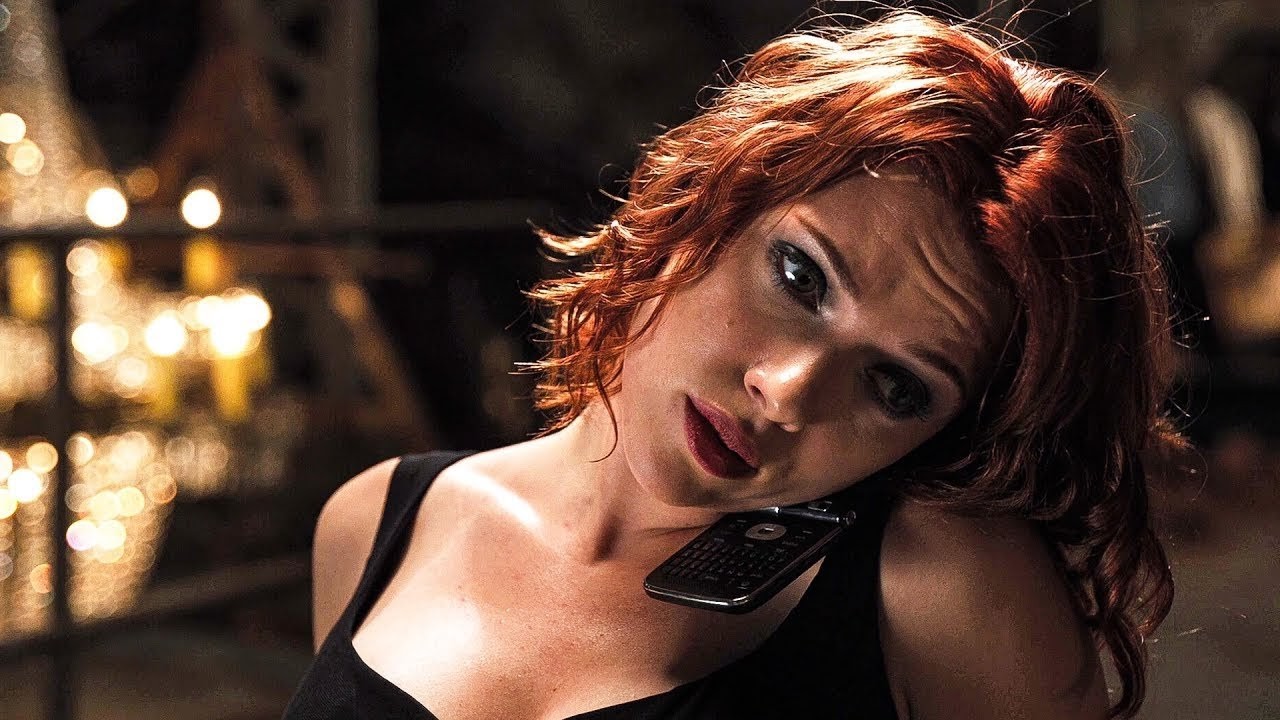 Do we understand the logic behind the choice to make her hair perfectly coiffed right before a battle? Nope, not at all. Maybe it's a confidence thing? 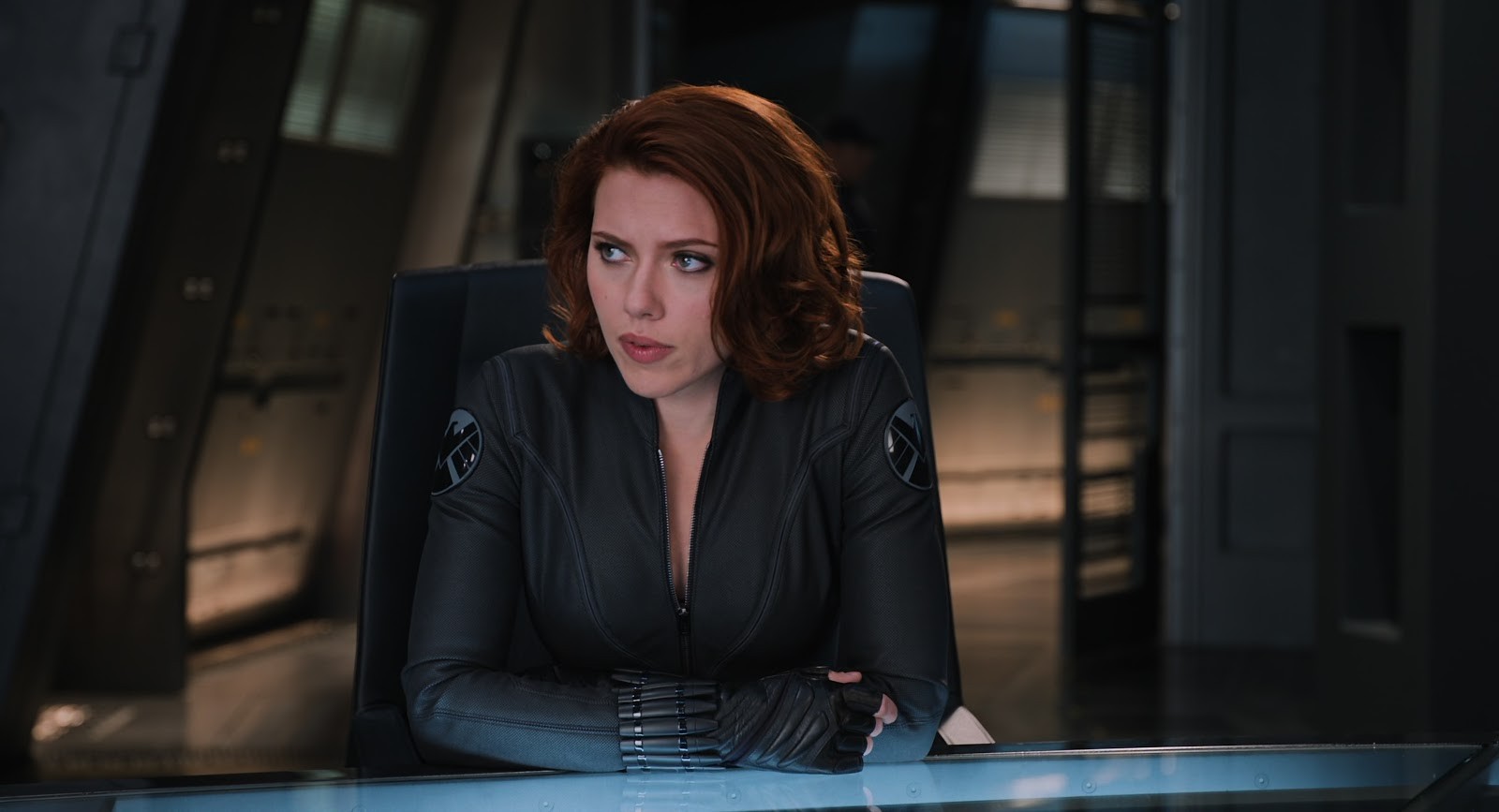 Regardless, this look is comparatively practical (who has time for long hair in the middle of a fight?) and looks really, really good. How she has time to style her hair so nicely when New York is literally falling apart and the world is ending, well, we don't know. But it is nice to see that the directors allowed for her hair to be slightly less immaculate after a battle than it was before the battle -- we'll take what progress we can get. 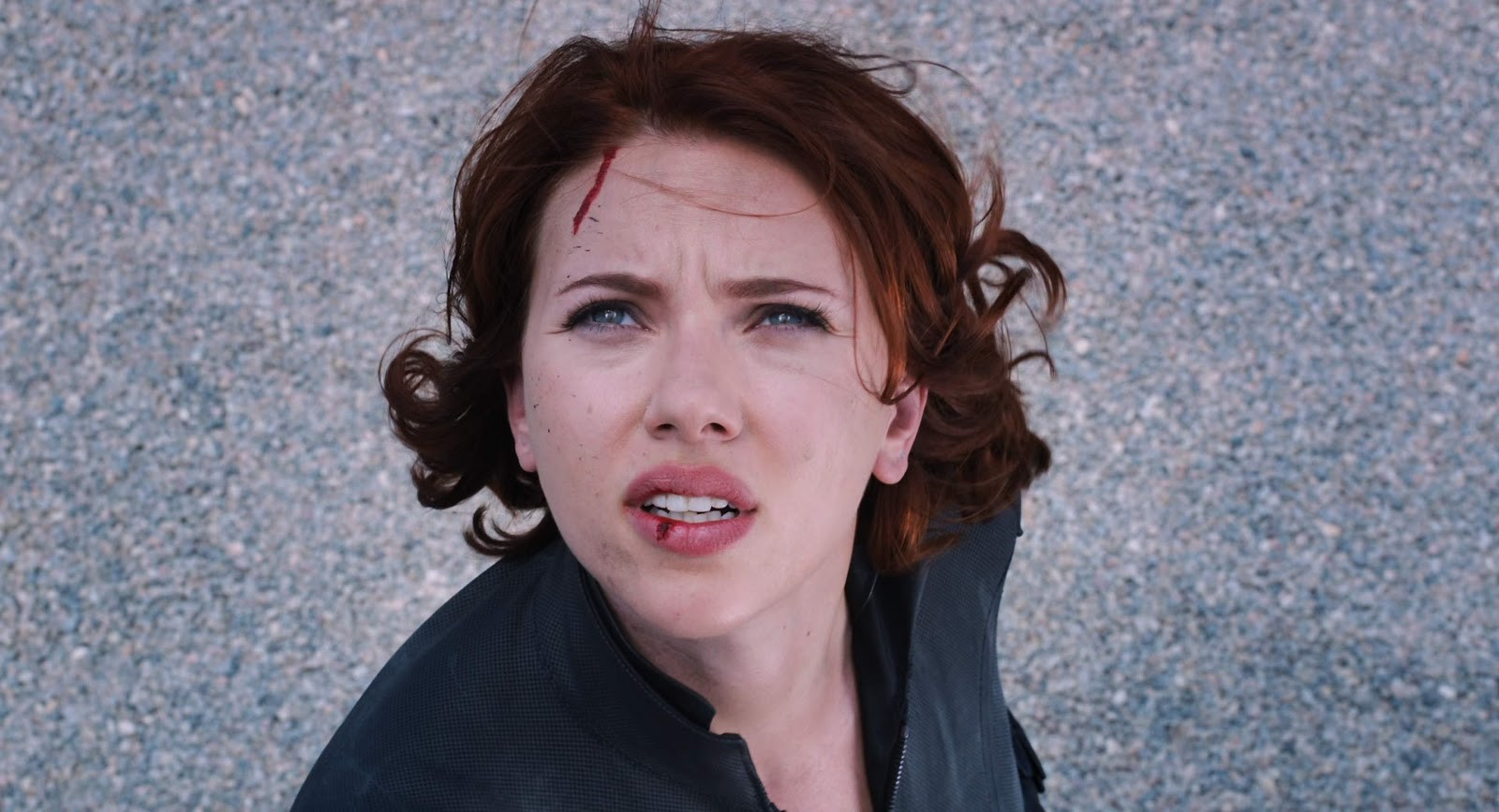 Hold up a minute. Is that...Could it really be? 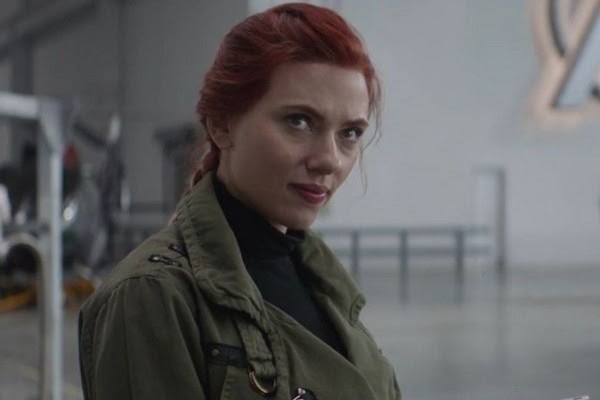 SHE DID IT. SHE PULLED HER HAIR BACK.

Is Natasha's hair the very best its ever been in Endgame? No, not at all. Our girl is having a rough time and let her roots grow out (honestly, relatable).

Still, we'd argue that Natasha's Endgame hair is not only more practical (braid!) and realistic, but also more interesting. Natasha's hair is actually involved in the story this time -- her grown-out roots help show the time that's passed since the snap. Because of this, not only does her hair reflect her own mood, but it also builds Endgame's feeling of time and place. Compared to previous movies, where Natasha's hair was perfect for the sake of being perfect, this is a HUGE improvement.

Finally, let's not forget that while Natasha's hair isn't as flawlessly styled as it was in previous movies, she still looks way cool. Who else wishes they could pull off grown-out roots as she does?

Final opinion: Black Widow's Avengers: Endgame hair is practical, cool, and tells a story. FINALLY, she pulled her hair back.

Low maintenance short hair... is that you?

(well, not really, because she definitely has to get her platinum hair touched up regularly but still!)

Although it's not directly addressed in the movie, Nat's hair has been dyed platinum blonde to help her lay low after, uh, ticking off the US government a little bit. (This is also why Captain America rocks a beard in the movie) We love that Natasha's hair is brought into the story in this way. Plus, it lays the groundwork for the hair-storytelling seen in the next movie, a real win-win!

Along with her dye job, Natasha seems to have discovered the joys of not curling her hair all the time, and she looks fierce! Ditching heat styling -- what a concept. We're psyched that the franchise finally gave Black Widow a haircut that doesn't require an insane amount of intermittent primping. This cut finally suits her need to save time and always be action-ready -- it's not like Thanos is gonna wait for her to do her hair every morning. 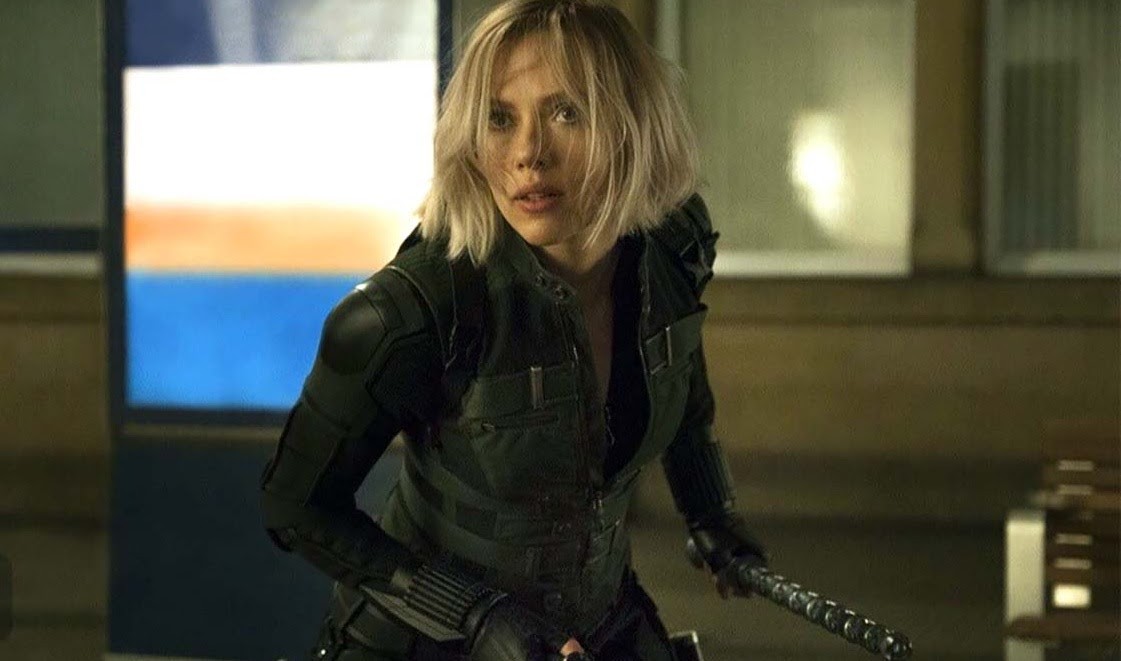 This cut is the spiritual successor to the one we saw in Winter Soldier; still blunt, still fabulous, but more appropriate for battle. Sure, her short loose hair might still get in her face a little, but it's way less of an inconvenience than her long loose hair.

This may also be the first movie that we've seen Black Widow's hair actually get really messy during battle. Hello, fierce yet fabulous.