Your hair is thinning? We can help...
Save 25% now and have a Formulate chemist design customized hair & scalp formulations that will help your thinning issues once and for all.
We will be in touch 🙌
Ready to start your healthy hair & scalp journey with Formulate's customized shampoo & conditioner?
Please provide a valid email address 😭
GET FREE HAIR ANALYSIS NOW  TAKE THE QUIZ NOW
Home
Culture
Mar 5, 2021
Comments
SHARE:

Is it too soon to call WandaVision a cinematic masterpiece? 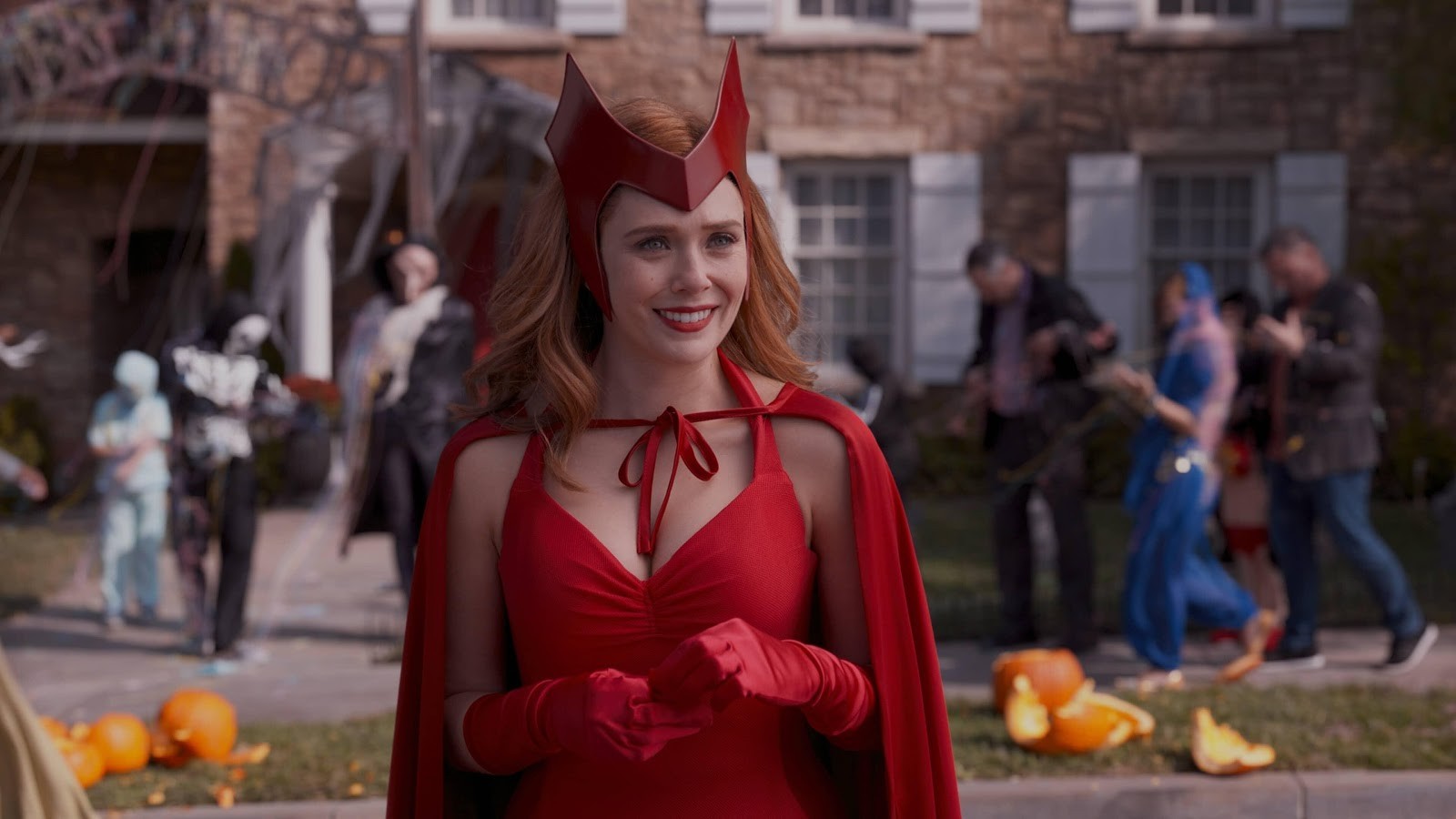 (WARNING. Spoilers galore ahead. If you haven't watched the entirety of WandaVision, proceed at your own risk.)

So. Wanda Maximoff. She's had a rough time in this show.

She was refused the right to bury her deceased lover's body, unintentionally(?) re-created a version of said synthesoid lover with whom she then had two magical babies (complicated grief, hello), and accidentally-on-purpose brainwashed a bunch of people into following her every command in a small town hellscape. And then, on top of all that, she then had to bear witness to the destruction of her perfect lil' fake family.

Big yikes. So how the heck did she have the time/will to create so many jaw-droppingly fabulous hairstyles?

Ok, yeah, she had MAGIC. It was magic. But still -- the girl's got serious taste. 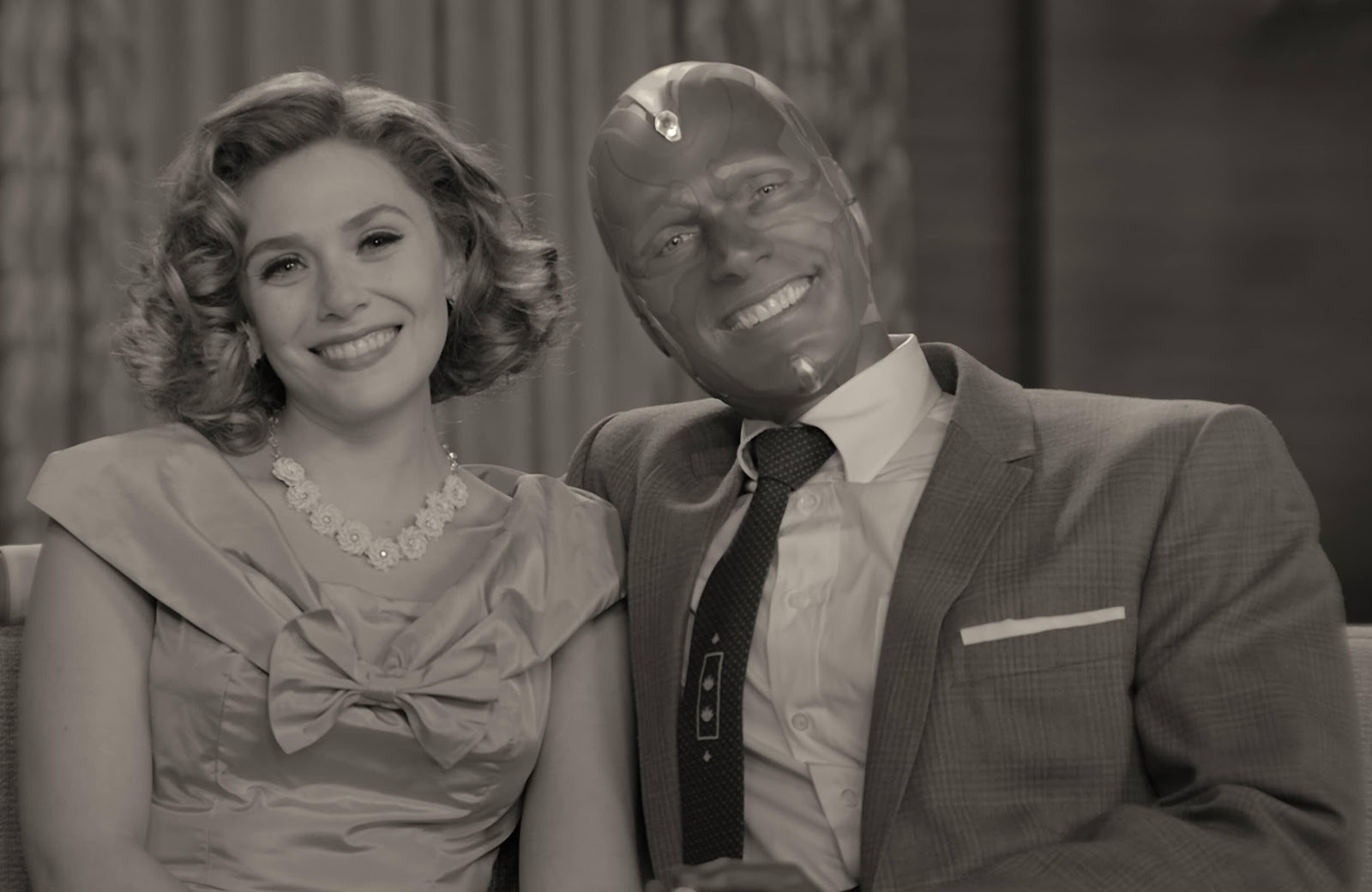 Honestly, it's a shame that these curls have fallen out of style. They're delightfully perky, and that part is perfect. And aww, look at how this hairstyle accentuates her dimples -- she looks so happy here. Shhh, no one tell her about what's about to go down in the next few episodes. 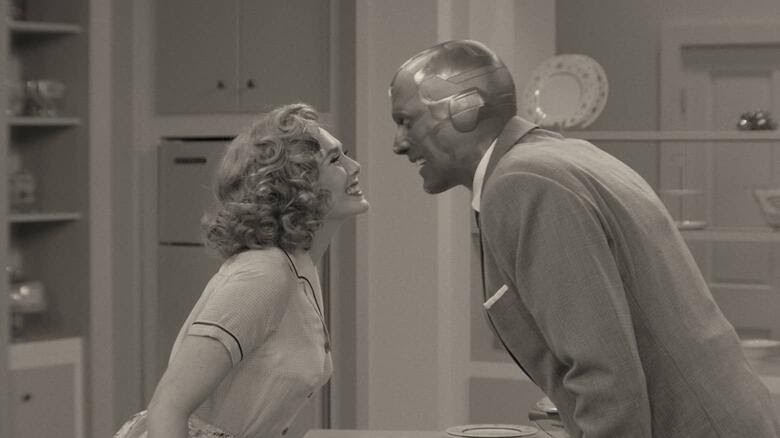 Side-shots show that the curls are plastered just a smidge to the sides of her head, but they're still cute. Bonus points for embracing the frizzies a little bit -- it's all very, "oooh I'm super cute but I'm also busy running this household." 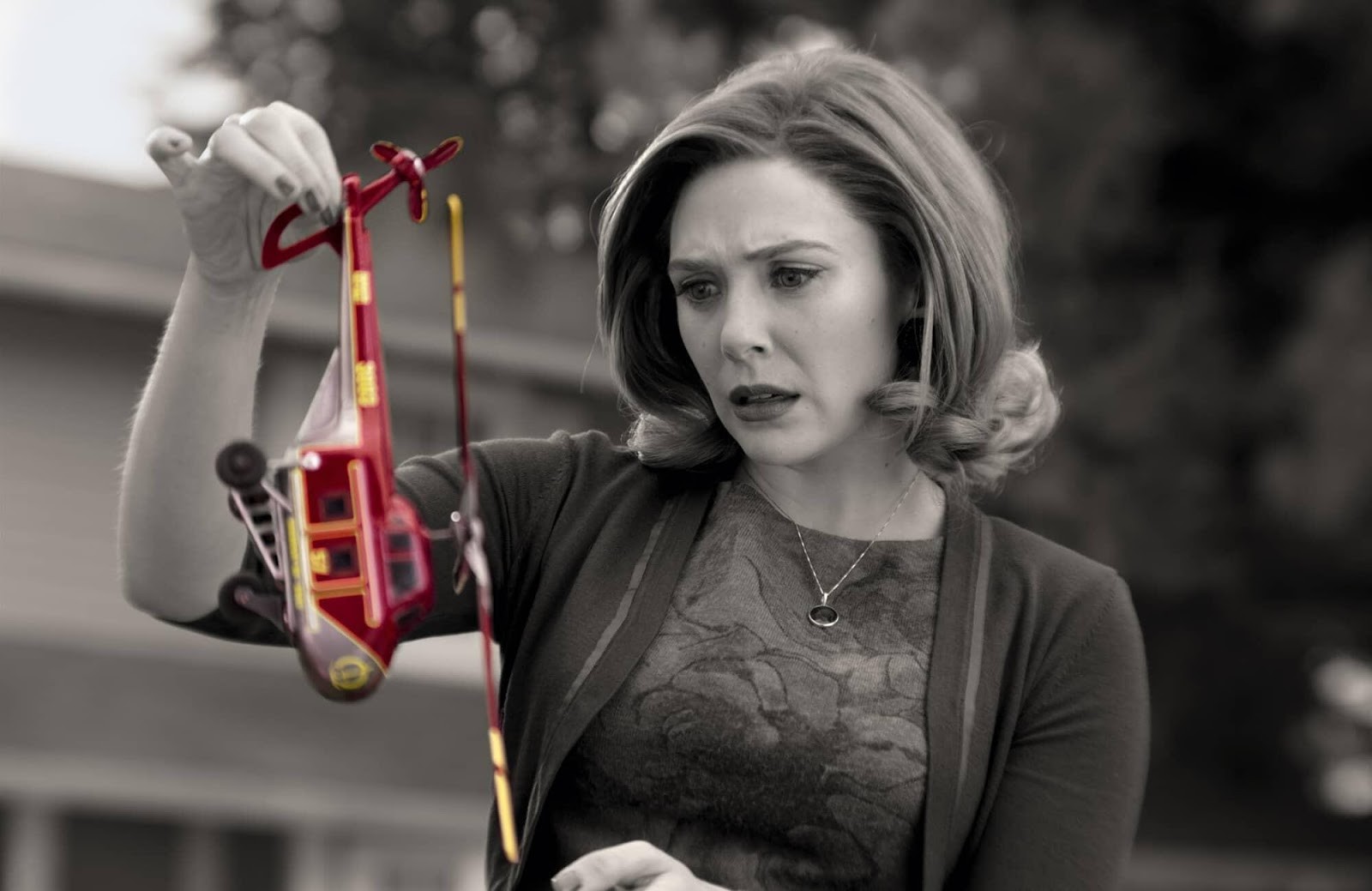 The curls are still present, though they've been pushed to her ends while the majority of her hair has been smoothed into a voluminous bob shape. Her style is shiny and smooth and still has plenty of body. 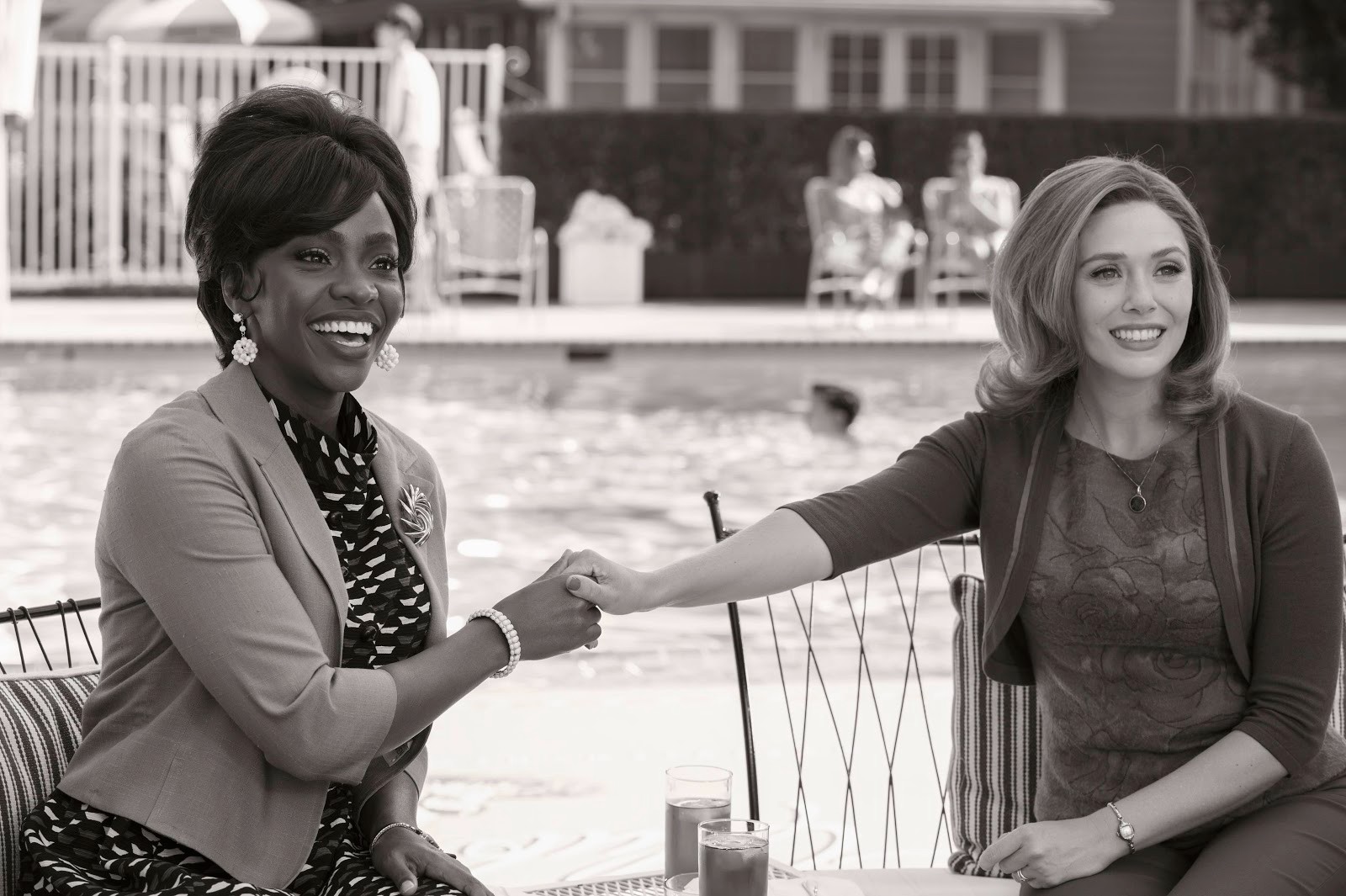 You also can kinda see Wanda's hair get a little less perfect as the day goes on which is fun. Hey, perfect bouncy hair can't last forever, even in a magic sitcom from the 60's.

Her end-curls start out tight, but they become more feathery by the time she's in the meeting with Dottie, Geraldine, and the other ladies. Still very cute, but less controlled -- maybe the stress of seeing the red helicopter and the knowledge that she could potentially lose her tight grasp on the town has had more of an effect on Wanda than she'd like to admit. 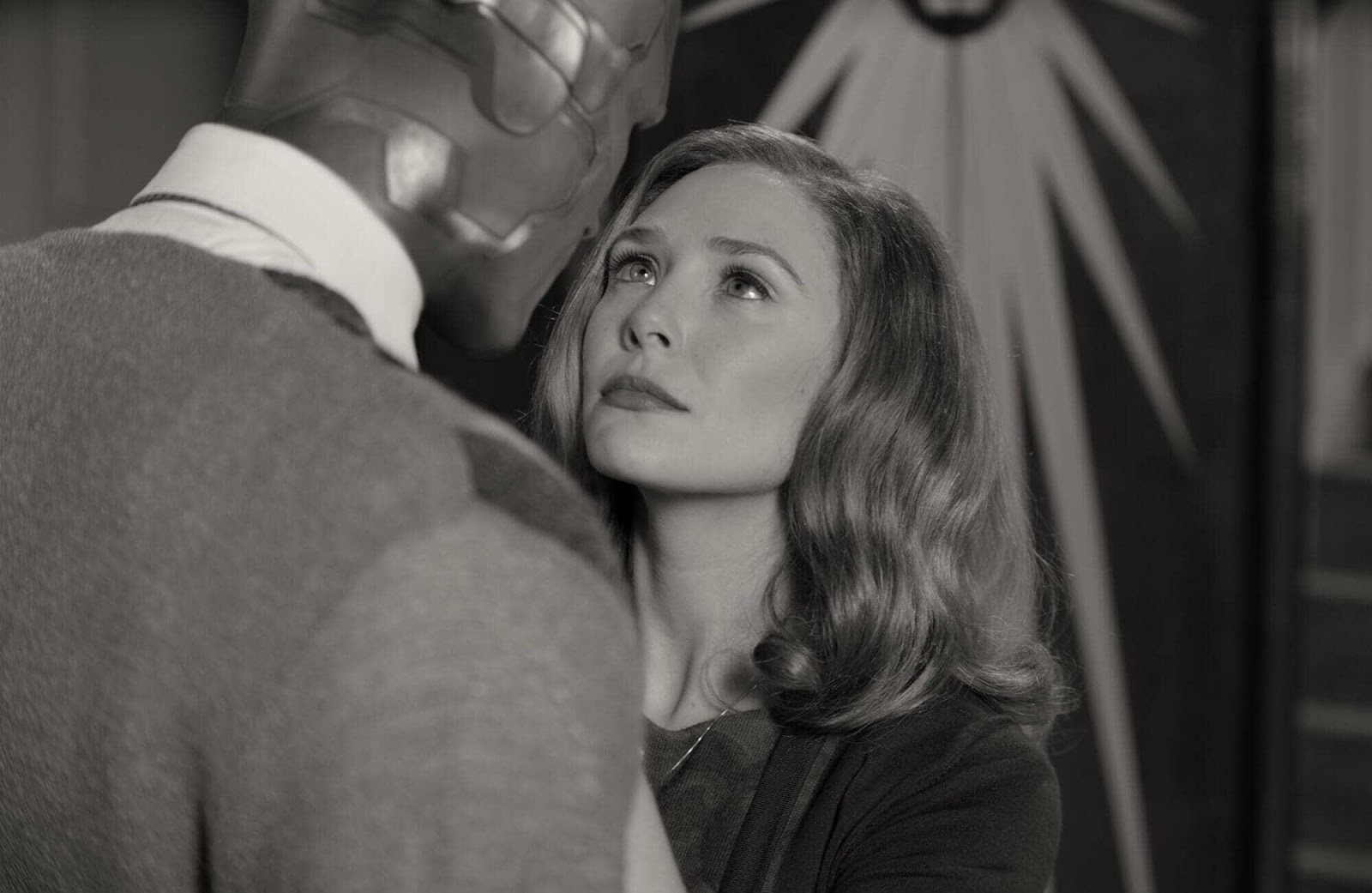 By the episode's end, the curls are nearly gone. Perhaps it was the radio that did them in. Or maybe it was seeing the spooky bee-keeper guy (whatever happened to him, anyway? Is he OK?). 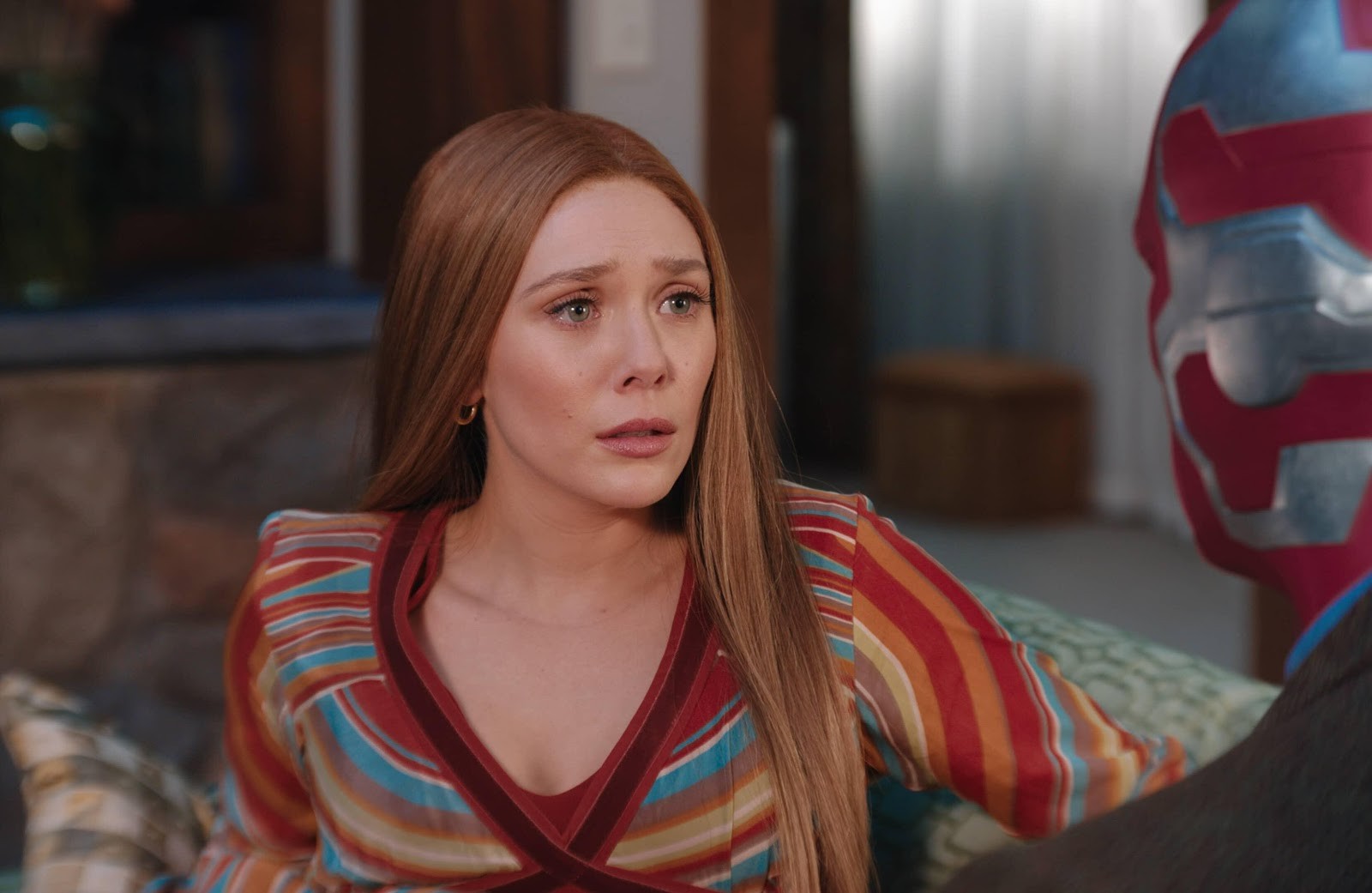 The curls are completely gone in this episode, replaced by smooth, shiny long hair. Wanda is supposedly in less control of her powers this episode, but her hair doesn't show it. Also -- she somehow gives birth without messing up her hair which seems... unlikely. 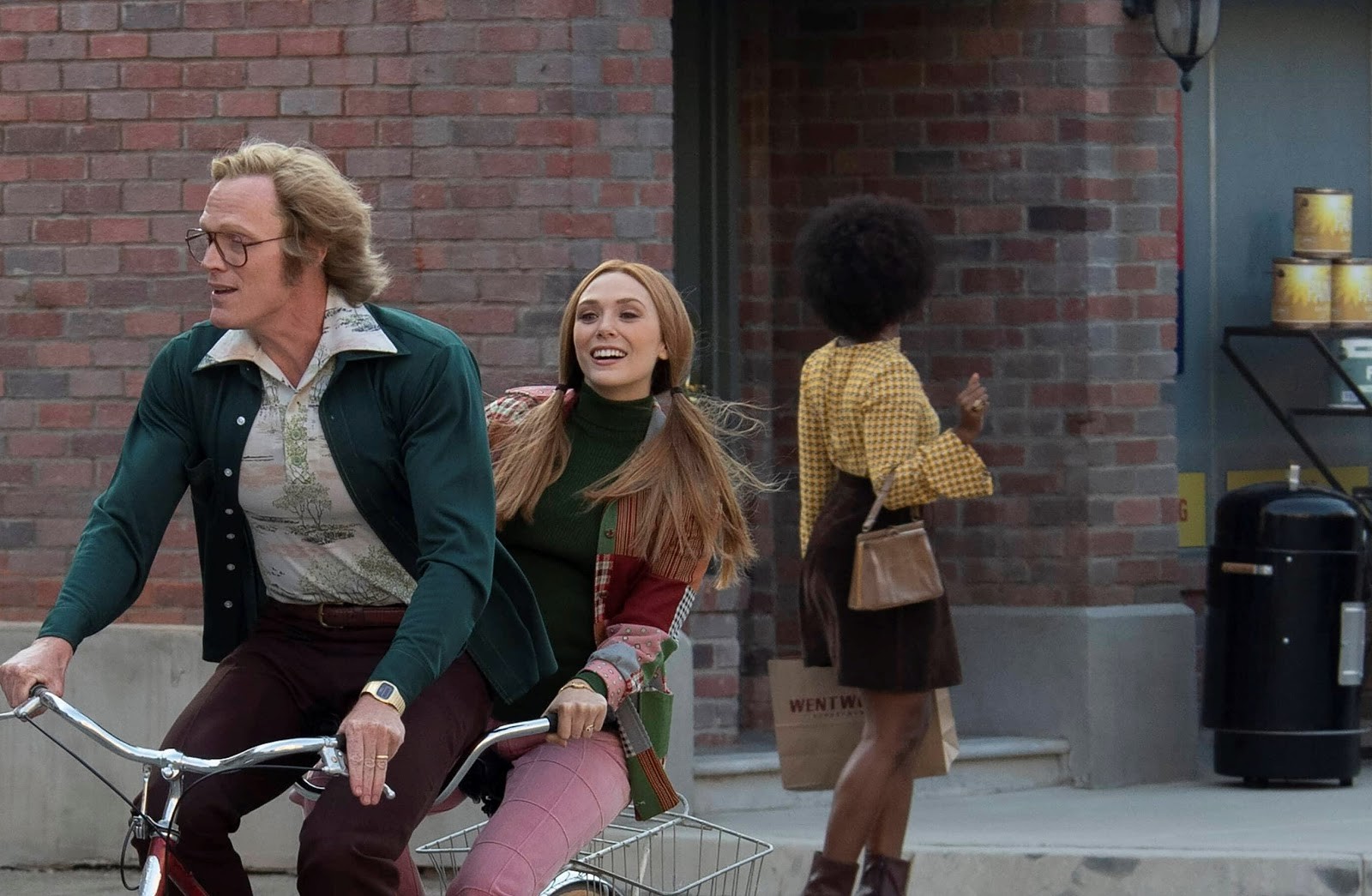 We only see them for a second, but big shout out to Wanda's fabulous opening-credits pigtails. They're adorable.

Episode 4 has a tragic lack of new Wanda hairstyles, so thank you, next. 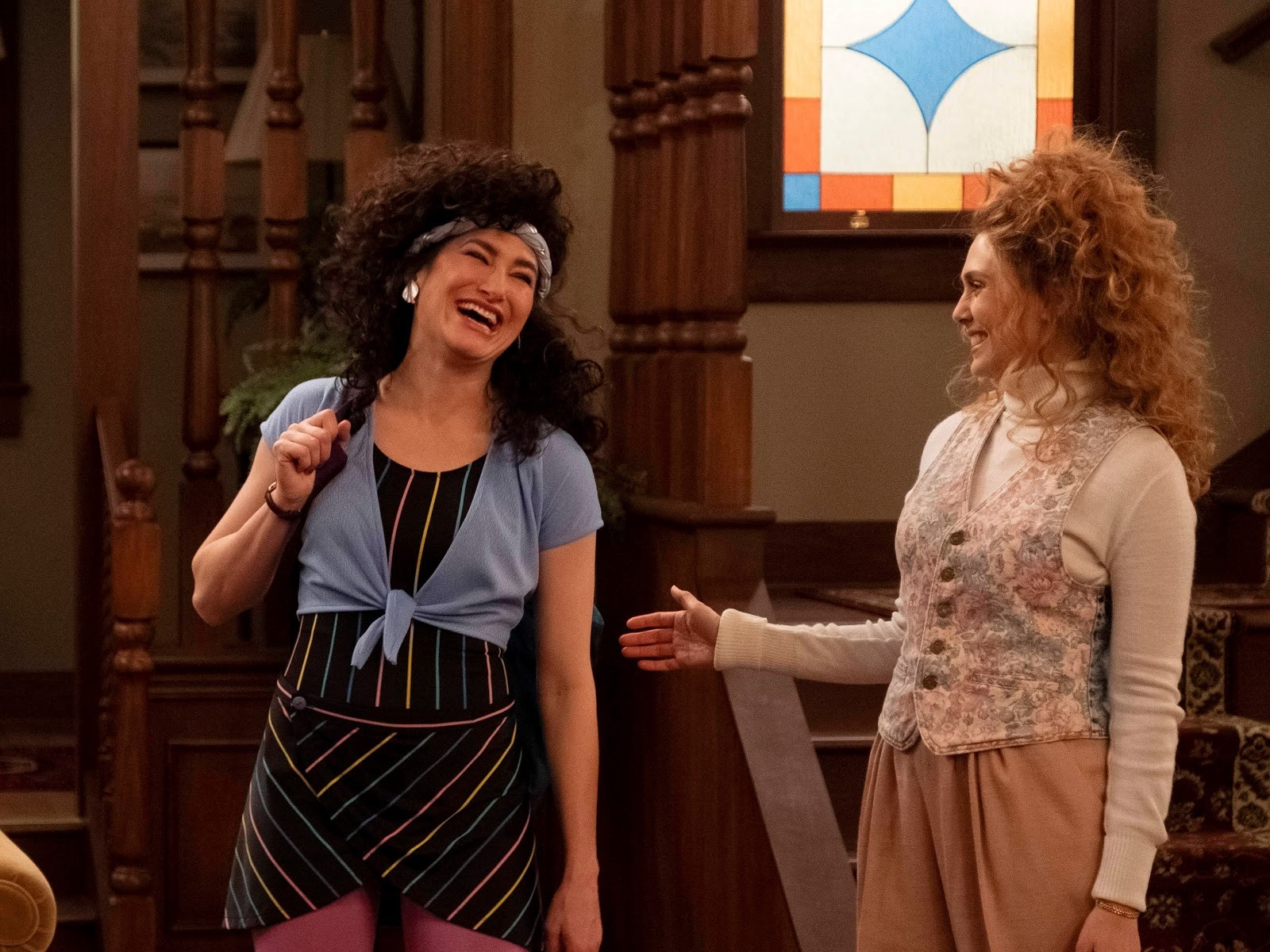 The 80's have arrived! And they've brought... exactly what you'd expect. If you can ignore the hideous grandma gear she's wearing in this scene, her hair is charming, if a little (okay, very) extra. But considering that this is the 80's, things could be a lot worse. 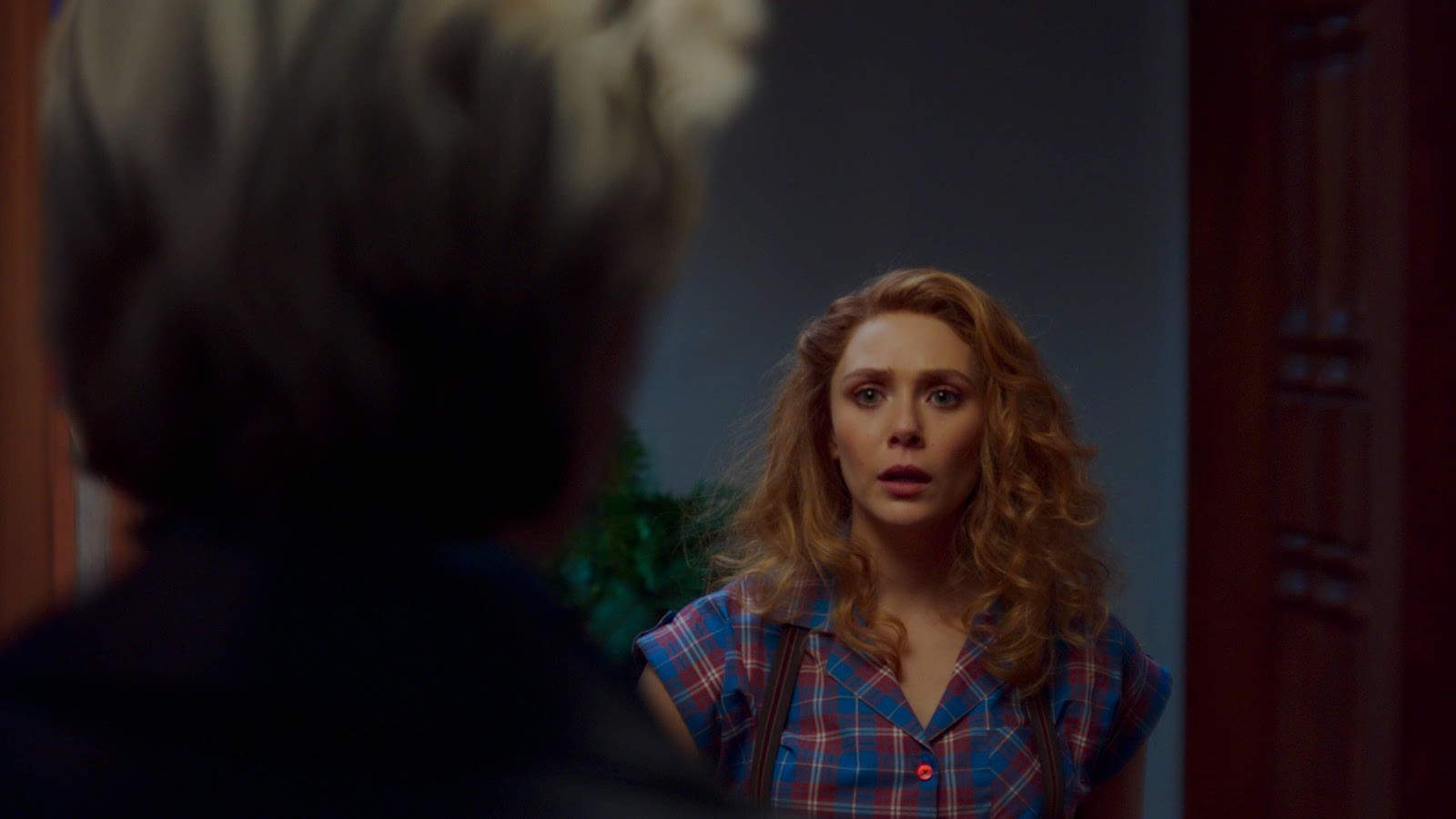 Wanda chills it out a bit with her second hairstyle. All in all, it's actually a pretty good look that we could see someone with naturally curly hair sporting today. 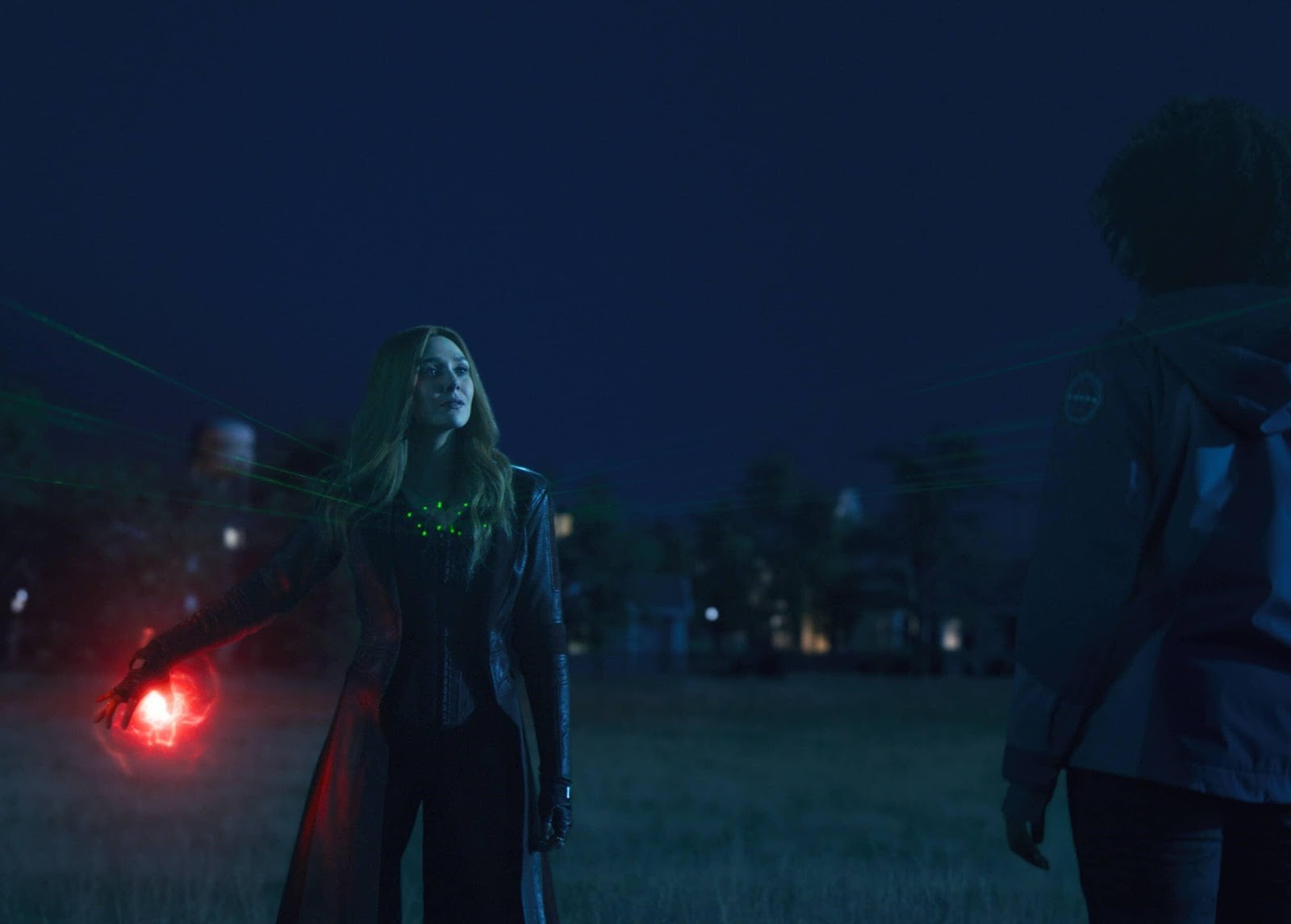 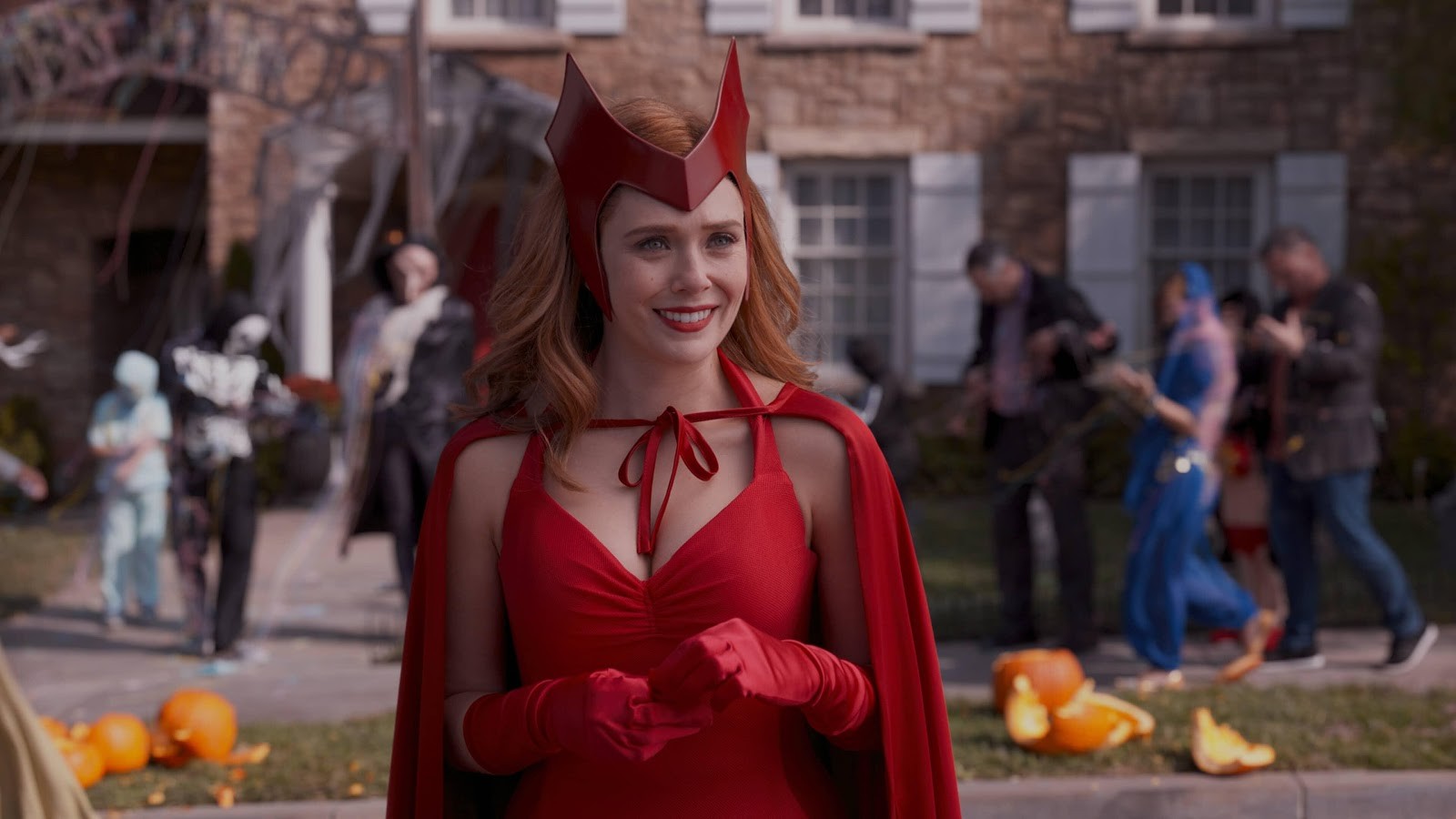 Well hey there, Scarlet Witch. Nice to see you.

Wanda's halloween costume is something like a plasticy, cheaper version of the eventual getup that she's wearing once she fully emerges as the Scarlet Witch ( side note: no one's even said her official title yet! This outfit is the first reference.)

Her hair has been similarly plasticized and Halloween'd. Wanda's Scarlet Witch tresses (the hair that's revealed at the end of the series) are messy, kind of like a gothier, kind of like a more 90's-ish take of her 80's hair. They're peicey and a little chaotic but still very cool, like natural waves that have been styled to be artfully mussed. Plus her headpiece/tiara thing has some serious spikes -- that thing looks actually dangerous.

Compare all that to the Halloween version of Scarlet Witch's hair -- it's been cleaned up. Her hair is obviously styled to look pretty and appealing. Her headpiece/tiara thing is plastic, and nonthreatening; it's been enlarged, but it's lost its detail, like a toy version of the real thing. 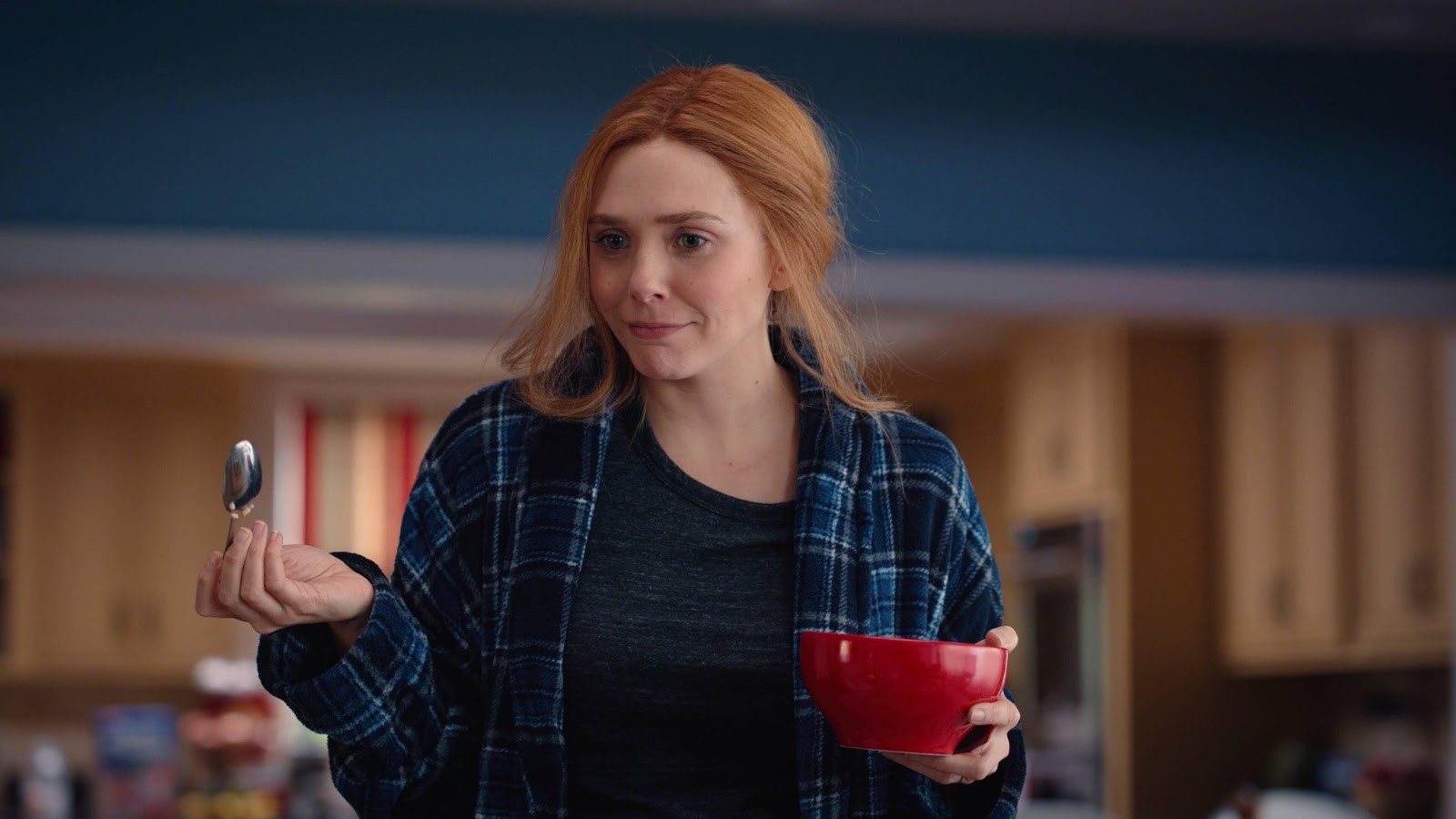 For a woman who skipped her show past the 90's... this look is pretty grunge. The time element of the 90's hair kind of works with what's going on in the episode though, since she's losing control of the series' timeline. Also we had that whole 90's revival during the 2010's (return of the flannel!), so yeah, we'll take it.

This is also the first hairstyle on this series that's been truly vulnerable (with the exception of that bathroom-hair moment in episode 6, because that was more just there as a gag-element). Both in her hair and her actions, Wanda's giving off a vibe of a mom who's not in control of her household, someone who's grieving, someone who needs help. Her hair's in the same state as her control over Westview: still there, but not great, Bob. 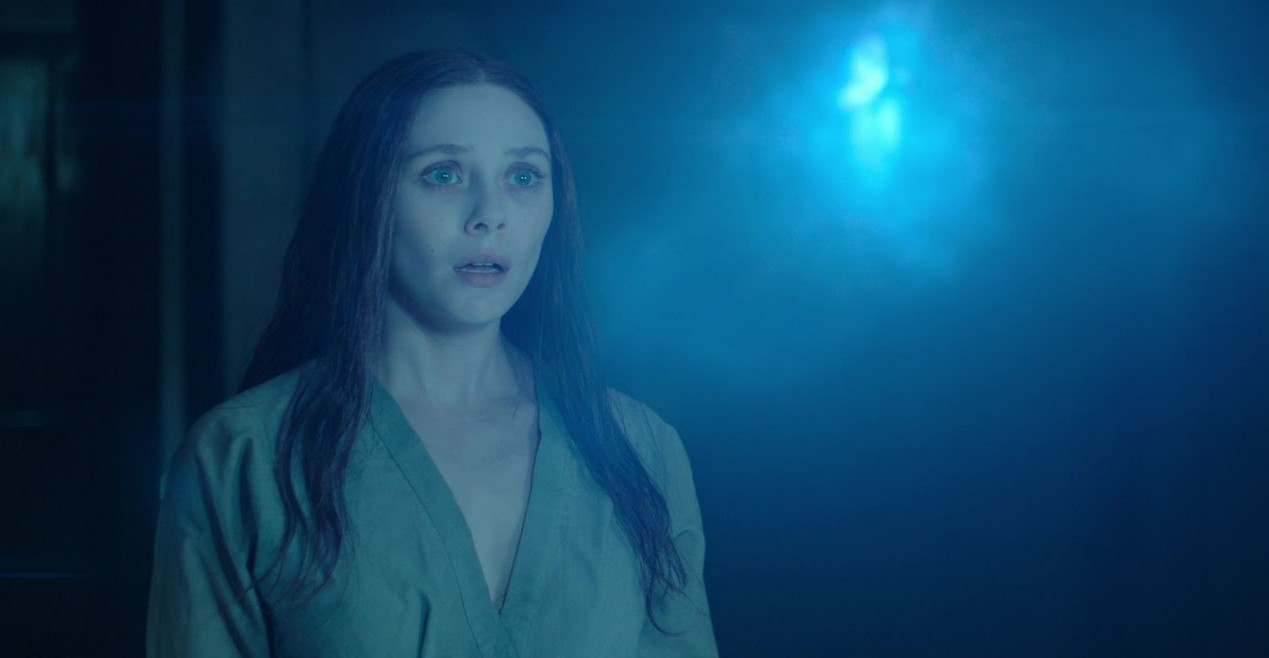 Eh. The TV show format has been ditched, so it's not really the best hair episode. We see more of Wanda's grunge mom hair, plus more of the purposefully styled waves that popped up when she stepped outside of Westview. Other than that, there are just the ~Wanda the test subject~ and the ~Wanda grieves her brother~ hairstyles.

Episode 9: the full reveal of the Scarlet Witch 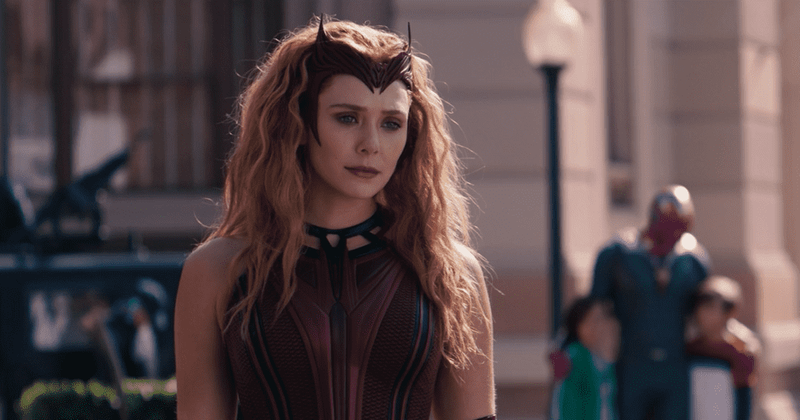 YES. She's magnificent. Look at her tiara/headpiece thing, it's so scary looking! And the waves -- they're perfectly witchy. This is a scary yet stylish witch of legend who you do not want to mess with. 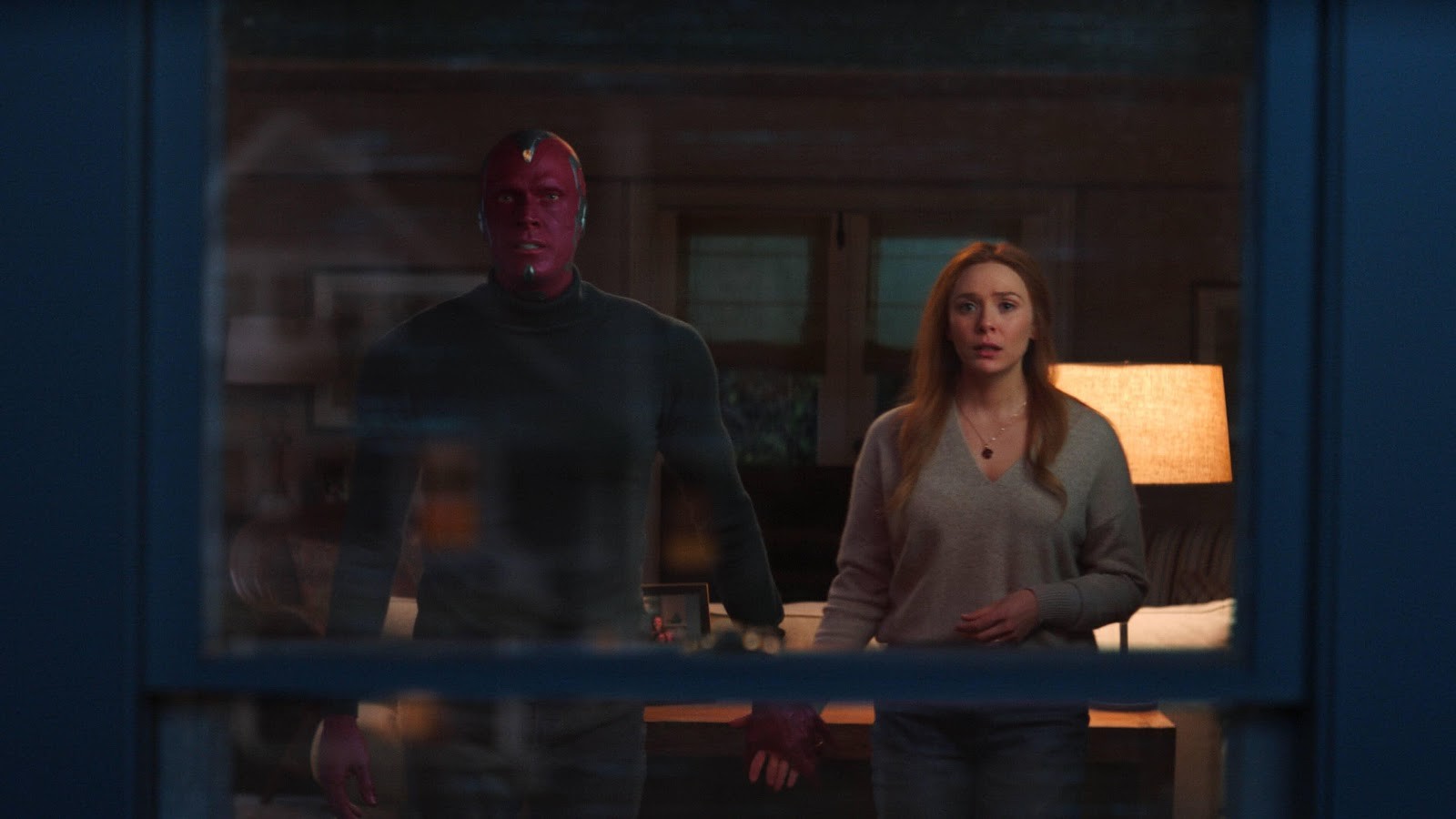 pH Balanced Shampoo: Everything You Need To Know

The heck does "pH balanced" even mean???

How To Grow High Porosity Hair

How Long Should I Wait To Dye My Hair Again?

What Is A Hair Cuticle?

Let's learn more about your hair's first line of defense against damage. ⚔️

The good, the bad, and the ugly ... when it comes to hair texture changes, we've got you covered.